Home » Nurse Liz, My Lighthouse in a Storm #ThankYouNurses 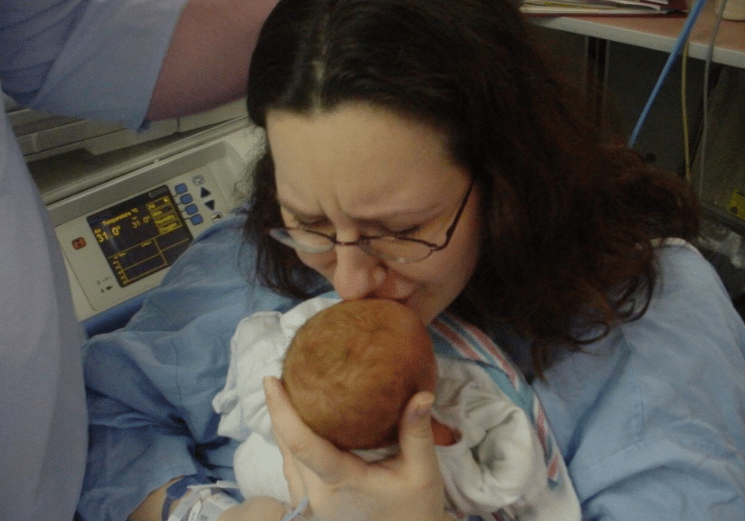 “So you understand that by delivering at 34 weeks your babies will be considered premature and will probably go to the NICU.”

That is what Dr. Holtzman told us, the head of neonatology unit at Mount Sinai Hospital Hospital in New York City, on December 15, 2004. I cried. I cried because I was scared. I cried because I was worried about my own health. I cried because I wasn’t sure if my babies were going to be OK. And when I finally stopped crying, I put on the bravest face I could possibly make, and we began the process of induction for a vaginal delivery with my twins. After 34 of the most grueling weeks, it was finally showtime and my body was officially giving up. My twins had to be born. Preeclampsia had struck and the only cure for that was their delivery.

So I braced myself and got my epidural, along with plenty of other meds (including morphine, since the pain had reached an all-time high.) I watched the contractions on the monitor to my left. Every time my uterus had a spasm, it was marked by a jagged apex on the paper next to me. My water broke at 12:30 AM with my husband sound asleep next to me (yes, you read that correctly) and a 24 hour news channel on the television attached to the ceiling. I was ready for what I was told to be a very long night. 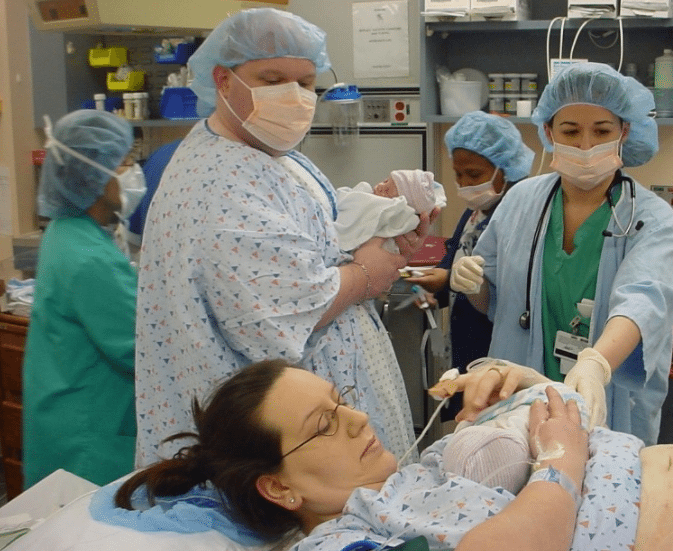 To my surprise, and the surprise of everyone else, at 5 AM Baby A was crowning. They didn’t believe it. They told me, “You’re a first time mom; that’s too soon”, as if there was some kind of chart they were following. I was an enigma. I’ve always been; this pregnancy was just one question mark after another. So many things arose during my short 34 weeks of pregnancy that all of the doctors at this teaching hospital were dumbfounded — but fascinated at the same time.

Shortly after being wheeled into the operating room, and two short pushes later, Baby A emerged wailing, with a head full of flaming red hair. Swiftly after that, with two additional pushes, Baby B emerged looking like a small dinosaur that had just hatched from an egg. The twins’ weights were way off the estimation. Previous sonograms showed that both children weighed over 5 pounds; we learned that both children were actually just over 4 pounds each. As the doctor had warned us, both of the children were quickly brought to the NICU. I was an absolute mess, physically and emotionally. I was back in that same place I was even before the babies were here. I was scared: scared for them, scared for me. I had already failed my babies and I wasn’t even their mother an hour. My body failed me and therefore I failed them.

My recovery room days were a blur. Doctors in and out. Discussions of transfusions. Requests for breast milk. Tests, machines, lights. Uncomfortable sounds and uncomfortable surroundings. After what seemed like forever, I was transferred to a regular postpartum room. I still hadn’t met the babies and — to be honest — I didn’t want to. I was afraid to see their tiny frames and their small hands, and I couldn’t imagine them with all the tubes that were helping them eat and monitoring their vitals. Without any pressure from my family (which I’m still thankful for to this day) I went down to see the babies. 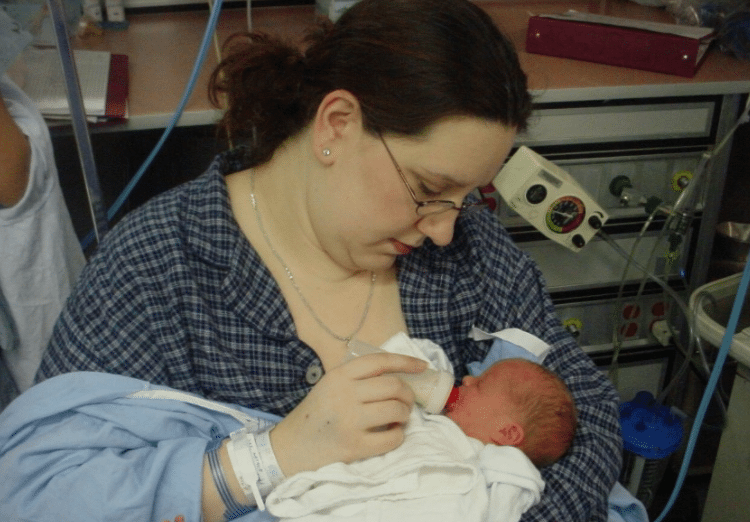 I was wheeled in with a blanket over my lap, wearing a pair of men’s pajamas that my sister had to run out and buy because my regular clothes didn’t fit me. I was still so swollen and still so uncomfortable. When the moment finally came, I was wheeled to the twins’ isolettes. They were both receiving oxygen in their tiny little houses. The nurse came over, opened the little door, and told me I could put my hand in. I was so scared. I was afraid to touch them. They looked so delicate. The nurse then put her hand on my shoulder and said, “They are absolutely beautiful. Congratulations.” Up until that point I didn’t realize that this should be a moment I should be celebrating instead of dreading. 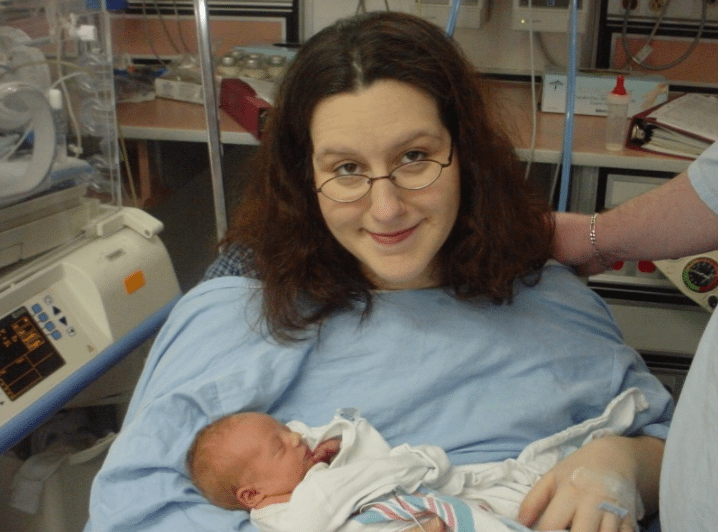 As the day went on, that nurse was there with me. She was very encouraging, yet gentle. She wasn’t obtrusive; she stood in the background monitoring the babies as well as how I was handling the whole situation. Towards the end of the day I finally introduced myself officially and I found out her name was Liz.

Liz became my rock. She was my lighthouse while I was still in the center of the storm. To me, she held all of the information I needed. She was one of my children’s primary nurse, meaning that she was technically only responsible for one of the twins daily. However, all of the nurses there truly did look out for all of the babies, not just their “primary” baby. I was in that hospital with my babies for 14 days until Baby B was discharged. Liz remained my rock during the final two weeks of Baby A’s stay. 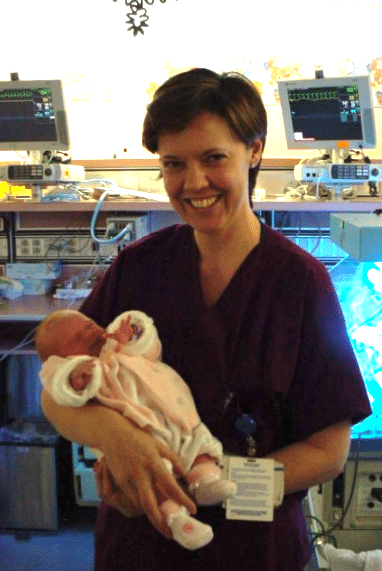 All told, we were there for 31 days. Towards the end of our stay, I didn’t want to leave. It was quite ironic to me, considering that I never wanted to walk in that section of the hospital in the first place. Liz and the rest of the nurses became my family. To this day, 12 years later, words cannot describe how truly thankful I am for that first kind word and that first gentle touch. Many times throughout the years I’ve thought about Liz and I wonder if her own family knows how amazing she is. I wonder if her family knows how many lives she’s made such an impact on. There are people who come into your life for a moment that touch your life forever. Liz is one of those people. 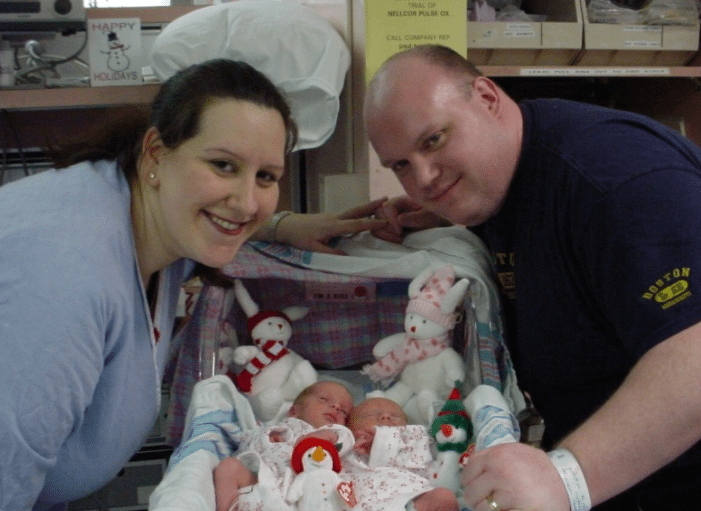 Liz still works at the same hospital in that same department, and I know that every family that delivers there is going to be well taken care of. Now, years later, as a teacher of expecting twin parents, I breathe a sigh of relief knowing every time someone delivers at Mount Sinai Hospital, if they should require a stay in the NICU, Liz will be there for them. When I finally wrote the book What to Do When You’re Having Two and it came time for me to make an acknowledgement section, one of the very first sentences I wrote was to Liz. It says, “I’d like to thank Liz, my nurse in the Mount Sinai NICU. You have no idea how much you helped me in my darkest hours. You are a nurse and our friend. You became part of our family. A hundred thanks to you.”

In collaboration with the Association of Women’s Health, Obstetric and Neonatal Nurses and the National Association of Neonatal Nurses, Pampers has launched the 2nd Annual Pampers Swaddlers #ThankYouNurses Awards to honor labor and delivery nurses, neonatal intensive care unit nurses, and postpartum nurses in our country. From now through January 27, 2017, you and your family are encouraged to nominate and share the story of an exceptional nurse who provides babies and their families with special touches of love. We also encourage you to spread the word to your friends who might also like to nominate someone.