Home » The Struggles and Triumphs of Breastfeeding Twins 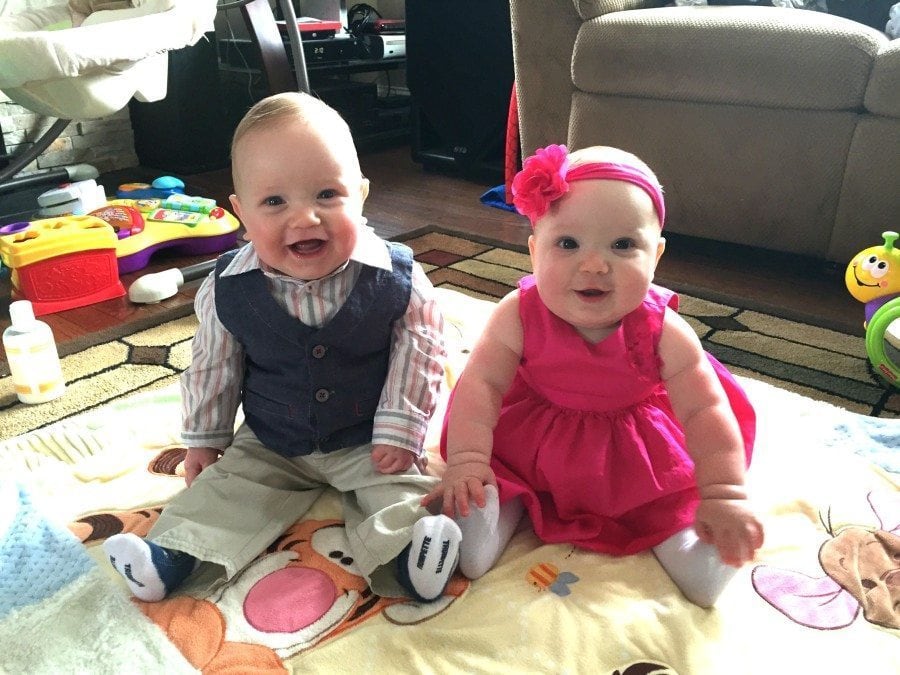 I always knew I wanted to breastfeed my baby for a year. With all the research and statistics out there, I knew this was the best option for me. I had seen my family members breastfeed their children for a year, and it seemed easy enough.

When I found out we were expecting twins, my thoughts on breastfeeding didn’t waiver. I figured I just needed to do some research on how to breastfeed twins, and I’d be all set. 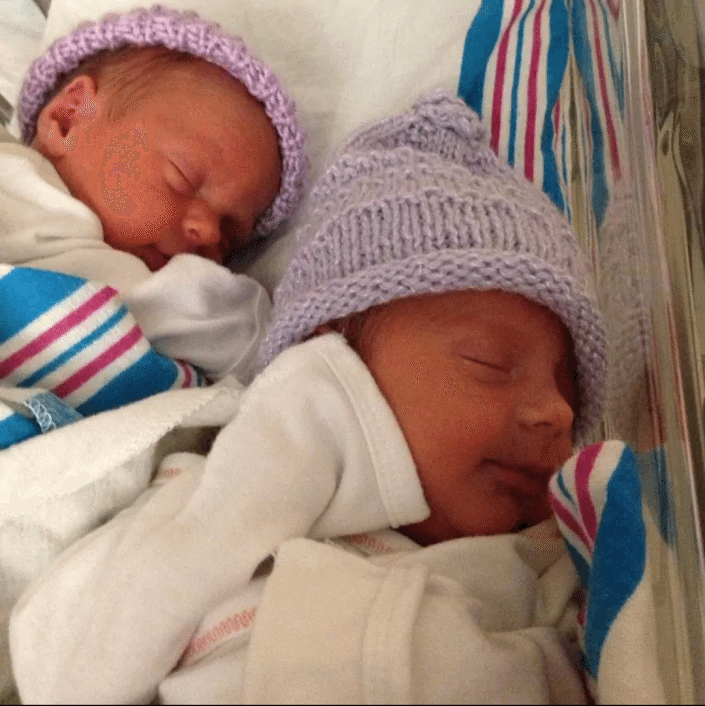 Our first day together seemed to go pretty well. My daughter latched right away and did her business like it was second nature. My son had a little more trouble latching properly, but with the help of the nurses and staff at the hospital, I was able to get him latched and eating.

Everything was going great. I was elated to be breastfeeding and basking in the joy of my two new bundles of joy. However, by the end of our second day in the hospital, my nurse informed me that my son had lost 20% of his birth weight and my daughter would lose her 20% by morning.

She advised me to consider formula for supplementation and start them on it before the doctors step in and forced the use of formula. I didn’t want to starve my babies, so I agreed. triumphs of breastfeeding twins

When I was discharged from the hospital, I was breastfeeding and using formula for supplementation. My plan was to cut out the formula and exclusively breastfeed. triumphs of breastfeeding twins

Well, things didn’t go as planned. This was turning out to be much harder than I anticipated, and I was quickly losing my will and desire. I was also extremely tired! At this rate, I was wishing away the months until they were old enough to start food and didn’t need to rely on me for all of their nutrition.

By my six-week postpartum checkup, I had mastitis and was in desperate need of a lactation consultant. My OB recommended a consultant, Christine, who also happens to be a nurse in the hospital where I delivered. I called Christine as soon as I got home and she was extremely reassuring that I was doing the right thing, even though it didn’t feel like it, and she would be able to help me sort out the rest when she arrived the next day. triumphs of breastfeeding twins 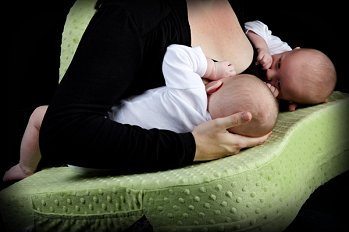 Christine showed up and stayed with me and my husband for three hours. During this time she helped me nurse each one individually and then showed me how to feed them tandem (kudos to anyone who does this. This style was not for me and I couldn’t make it work). triumphs of breastfeeding twins

After she left, I was feeling confident and back on track. But, I still didn’t trust myself and my ability enough to let go of the supplementation formula. So my husband and I decided that we’d only give formula as their last bottle of the night, which we’d done since day one.

By Thanksgiving, the twins were just shy of three months old, and I had had enough and was at my breaking point. I didn’t want to breastfeed anymore, I wanted to give up and just use formula. I couldn’t sit on the couch all day and night, every day, just feeding babies.

But at the thought of giving up breastfeeding I would break down in hysterics and be swallowed up by the guilt of not being a good mother and not doing what I believed was the best for my babies.

So, I did the next best thing, I started pumping exclusively. Kudos to anyone who does this — I could not keep it up, it was way too exhausting. triumphs of breastfeeding twins 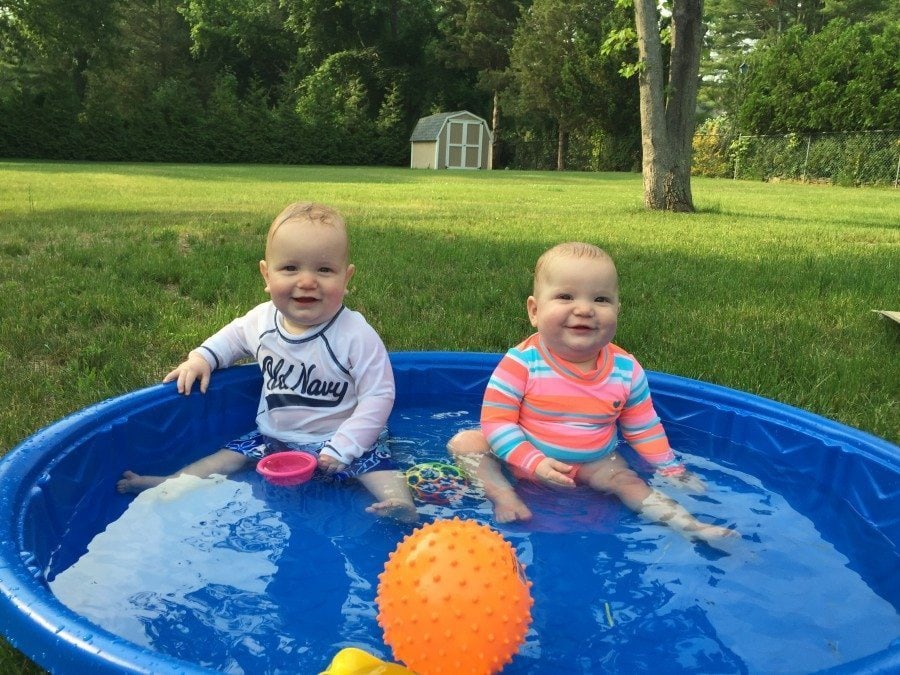 I’ll never forget the day it all finally clicked. It was right before Christmas and I was on the phone with my sister-in-law and I had just finished feeding and changing them. They were happily swinging away, until my son started to cry.

Again, not trusting myself, I thought he was hungry. I was home alone, I didn’t want to hang up the phone, and there were no clean bottles. So, I took out my Boppy pillow and nursed him while I continued to chat on the phone. And when he had his fill, he unlatched himself, stopped crying and went back to swinging happily! triumphs of breastfeeding twins

I wanted to do a dance of joy!! I can’t even explain what I was feeling inside when this happened. Christmas had come early!!! From that day on, I breastfed them, one after the other, on a two-hour schedule. As they got older, and more efficient, it took less total time to feed them both.

It did take a little while for me to give up the formula bottle at night (I like my sleep), however, that too, fell by the wayside around five months. They still get a bottle a night — their only bottle — of milk pumped from the previous night. triumphs of breastfeeding twins

Now that they’re almost eleven months and I’m starting to think about weaning them off, I get all emotional and choked up. I’m really going to miss this special bond that we’ve created. It makes me sad to think that they’re not going to need or rely on me so much anymore. I guess this is only the beginning of many milestones of raising babies into adults. 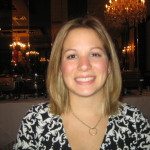 Dana Calandra is a stay-at-home mom of fraternal, 10 ½ month old, boy/girl twins. She lives in the suburbs of New York City with her husband and twins. She loves to cook and bake. Dana is currently training for her first 10k race in the fall, and hopes this will kick start her journey to lose the baby weight!

Related Articles – The Struggles and Triumphs of Breastfeeding Twins

The Nuts and Bolts of How I Exclusively Breastfed Twins

My Twins Breastfeeding Journey: From NICU Pumper to Exclusive Breastfeeder

The Best Positions for Breastfeeding Twins 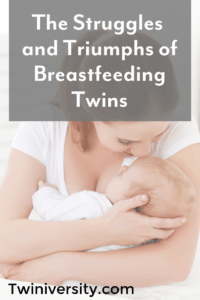 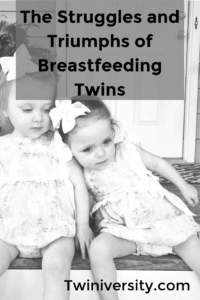 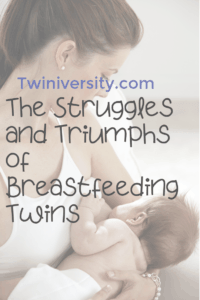 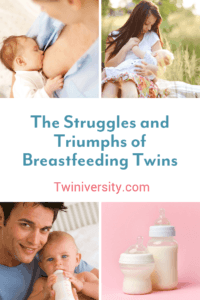