Home » Twins Plus One: In the SAME pregnancy? 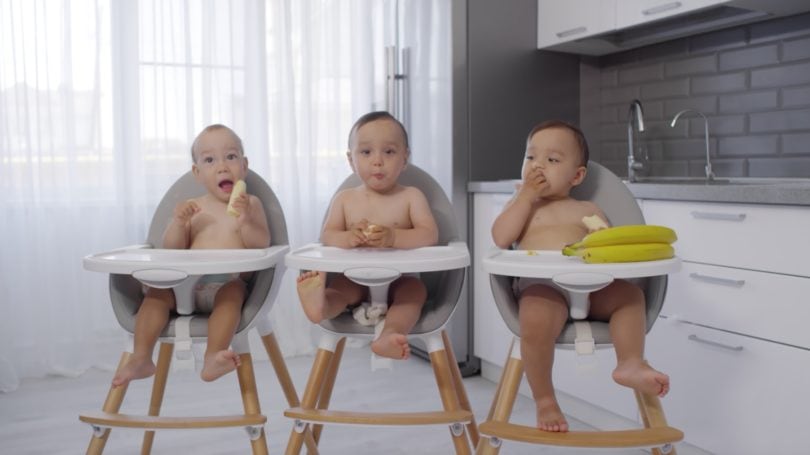 You conceived a third baby in a process called superfetation! Superfetation happens when a separate egg is fertilized by sperm in the womb days or even, weeks after a pregnancy has already started. Don’t worry readers, this is really rare!

Exceedingly rare, according to Healthline.com but there is a window of time during which another ovulation and sperm can sneak in and unite before hormones and a mucus plug make it impossible.

This is exactly what happened to TikTok star @TheBlondeBunny1. She explained in one video, “This happened to us because my hormones didn’t stop me from ovulating, I ovulated another time.”  In one video, she explained that her mucus plug had yet to form, which allowed a second pregnancy to happen. She was not taking any fertility drugs at the time and does not have a bicornate uterus.

“We’re lucky enough that they’re close enough, they will all have the same due date, we just need to get the third baby past the 28-week mark, and hopefully carry them to 32, maybe even 35 [weeks],”

In the case of TikTok’s Bunny, she ovulated after becoming pregnant but before her body’s pregnancy hormones kicked in.

“I just happen to hyper-ovulate, and ovulate twice in a month, so that is how I got pregnant after already getting pregnant with twins,” she said in one of her videos.

Luckily, they all have the same due date, she said. All babies appear healthy. She has chronicled the ups and downs of her pregnancy on TikTok as she, her partner, and her followers revel in the miracle.

Despite the surprise, the TikToker is excited to become a mom for the first time. “We wanted to be parents, and God said, ‘Watch out what you ask for,’ and gave us three at once,” she said with a laugh. “Scared, excited, so many different emotions but I can’t wait for them to be here.”

The Twiniversity family wishes the @theblondbunny1 the best of luck!

Having twins? Ever wish there was an expecting twins class to get you ready for your twins? Well, relax, there is! We offer Twiniversity classes in New York City, Chicago, Houston, and ONLINE, created exclusively for expecting and new parents of multiples. Click here to learn more… and while you’re at it, check out our breastfeeding twins class and baby safety class!

Make sure you follow @Theblondbunny1 on TikTok to find out more about her journey into becoming a new mom.