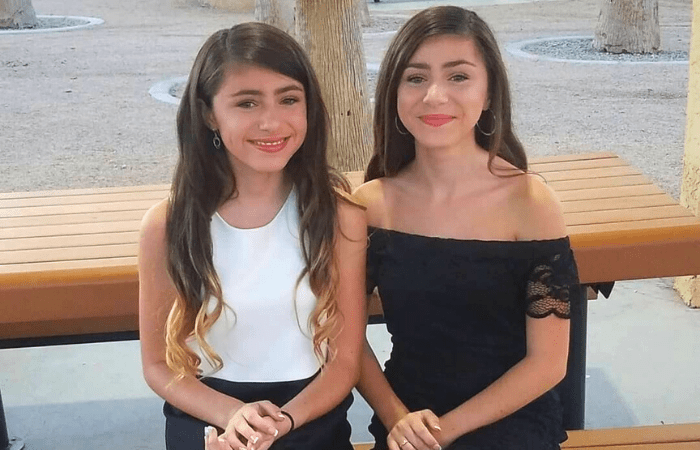 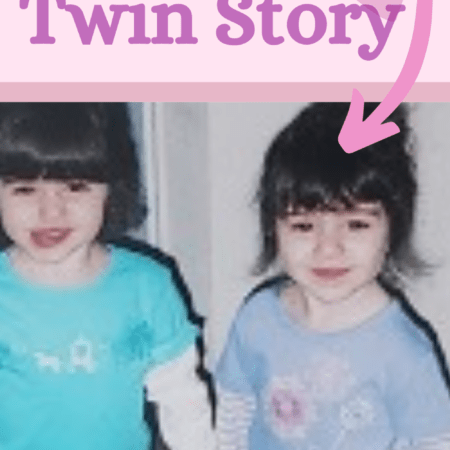 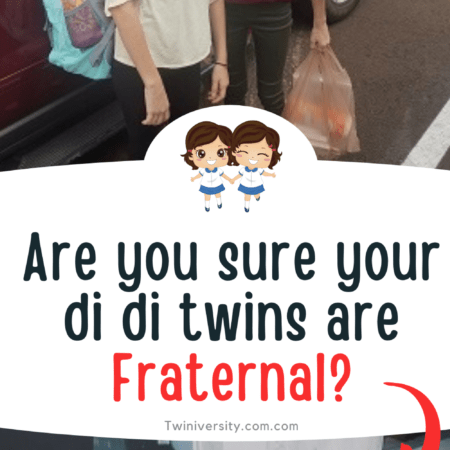 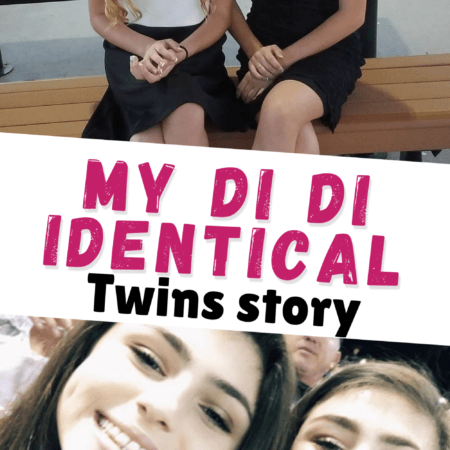 Are you sure your twins are really fraternal? Read how this twin mom was shocked to learn her twins were actually Di Di identical after 13 years!

Everyone knows that there are two types of twins. Identical and fraternal. It is often one of the first things people ask their doctor and one of the first questions strangers will ask you from the day they are born until they are old enough to answer on their own.

I was a mere 19 years old when I was lying on the exam table while the doctor listened to my belly and found two heartbeats. A few moments later I found myself in an ultrasound room where I was told that there were indeed, two. Twins. Two placentas and two sacs. One girl and one to be determined.

My OBGYN told me that even though they each had their own placenta and sac, there was a 30% chance that they would turn out to be Di Di identical if they were both girls.

Spoiler alert: They were both girls.

At about 29 weeks Baby B was diagnosed with sIUGR due to placenta insufficiency and I was sent directly to the maternity ward at the local level III NICU to be put on constant medical watch and bed rest. I was taking each day that we were able to keep the babies in as a victory when one morning at 32 weeks and 5 days along I was told “It’s time.”

I was having contractions while I slept and Baby B’s heart rate kept dropping. They were born and taken to the NICU so quickly that I didn’t even have them check the placentas or have them taken to be tested at the lab. It completely slipped my mind.

About two weeks later we went on to their first pediatrician appointment where the doctor asked me if I was sure they were fraternal twins and not Di Di identical. By then all I saw were the differences between them. All I could say was, “What do you mean they look the same? Can’t you see that one of them is a whole two pounds heavier than the other? And has a rounder face, and a thinner nose? They look almost nothing alike!”

The pediatrician raised an eyebrow and moved on to the basics height, weight, and health. He was probably thinking I had lost my mind. And I know I was thinking he had lost his.

Over the course of the next 13 years (yes, this went on for 13 years) we were constantly challenged about their twin zygosity. I’ll admit now that I was absolutely suffering from mom-goggles. I couldn’t understand why no one believed that they were clearly fraternal.  To me, they barely looked like sisters, let alone Di Di identical twins.

Teachers, doctors, school parents, and even strangers seemed to be in agreement. They were definitely identical and their mother has lost her mind.

About a month before their 13th birthday we had decided enough is enough. We looked around online and found a mail in cheek swab kit and placed our order. It was surprisingly easy to order and inexpensive.

A little less than a week before their 13th birthday I got the email with the results and they both peered at the screen with amazement and a bit of relief. They both agreed that it wouldn’t change anything between them, but they did hope they were Di Di identical since we know that fraternal twins often have a genetic component and they both have said they do NOT want to have their own set of twins one day. Go figure.

We decided to have a twin type reveal at their birthday party with all our family and their friends. Off to Pinterest I went to find cute ideas. After hours and hours of searching, we finally landed on a poster-sized handmade scratch-off. I hadn’t seen that before and thought the originality would be fun. The only people who knew lived in our house so we just had to keep the secret in-house for a few more days.

The girls wanted to take a vote ahead of time to see what most people thought and oddly, it was pretty close to an even split. It was interesting, though. It seemed that the closer the person was to my girls, the more likely they were to guess that they were fraternal. That’s not to say most of them were particularly shocked with the result.

They each scratched and scratched until finally they had 3 matches. “Identical twins”! It was like watching a whole bunch of switches being turned on in peoples heads. All of a sudden they all saw what the outsiders saw. They have the same eyes, the same chin, their hair is almost exactly alike, they are the same body type, although one is slightly taller than the other. All in all, they are pretty similar. Even I must admit, I saw it, too that day.

So basically, I finally got them the test to shut everyone up. To show them all proof that they really are for sure fraternal twins. I was wrong. Twin mom goggles are real and I was suffering from them, big time!

How can you tell if Di Di twins are identical?

Obviously, if your twins are boy/girl, you know they are Di Di fraternal twins. Otherwise, the only way to know for sure if you have Di Di identical twins is to do a twin zygosity test. These tests are simple, painless, and inexpensive. A quick search online, in your local twin mom support group, or even asking your pediatrician will give you plenty of options. Make sure you do your research to see how long it will take to get results and look for any additional costs.

What does Di Di mean in twins?

There are two main types of twins. Fraternal twins are Di Di twins. That means that each baby has its own placenta and sac. Di Di is short for dichorionic diamniotic, meaning they have their 2 (di) chorionic (placenta) and amniotic sacs.

These twins are fascinating in the sense that they are no more alike than any other siblings and they develop as if the other twin isn’t even there in the womb at the same time. Pretty interesting. Between me and you, fraternal twins hold a special place in my heart for that very reason. It’s remarkable to say the least.

Identical twins are usually either Mo Mo or Mo Di. This is short for monochorionic monoamniotic or monochorionic dichorionic. That means that they share a placenta and can either have their own sac or share. But let’s not forget, Di Di identical twins can happen if the egg splits very early on, like in my case.

How common are Di Di twins?

Di/di twins account for the majority of all twins born in the world. A little more than 3% of all live births are twin births and most of those are di di.

Can twins in separate sacs be identical?

Twins who share a placenta and have separate sacs are called Mo Di and are the most common type of identical twins. These pregnancies are not as high risk as a Mo Mo pregnancy but higher risk than a Di Di identical or fraternal twin pregnancy.

So, what would be the reason to test for zygosity? Many people would say it doesn’t matter. And with regards to their twin bond or how we treat them at home, that would be absolutely correct.

There are reasons you might want to know for sure.

Mostly, we did it for funsies and boy was it a shock to our system. It came in handy 3 years later when one twin was diagnosed with a rare genetic brain disease. We automatically knew her sister needed to be screened immediately to avoid complications.

No one wants to think of the worst case, but in hindsight, it was a good thing we already knew. Once you have proof that they are identical twins, the insurance gets things moving pretty quickly to get the other twins diagnosed and that could save a life in some cases.

Ultimately, the choice to test or not is entirely up to the family. Some twins go their whole lives without ever knowing for sure if they are DI Di identical or fraternal. If they don’t care, you might not want to bother. But if you do a test, be prepared to be surprised by the severity of your own mom (or dad) goggles! 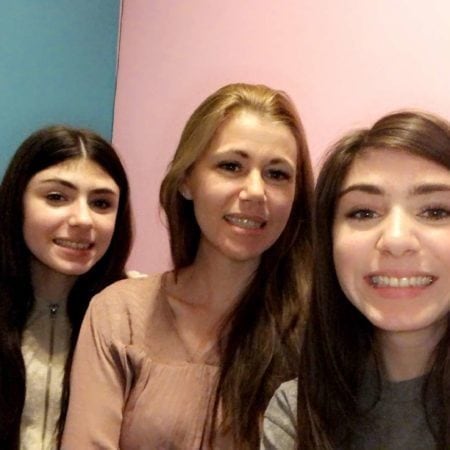 Megan Loden, COO: “Chief of Other” Stuff No One Wants to Take Care Of. Associate Editor. Mentor Program Coordinator. She is Mom to 17-year-old identical twins girls and a 12-year-old son. When she isn’t busy embarrassing her twins with her mere presence, she can be found obsessing over her 12-year-old son or talking to her dogs and cats while her husband answers on their behalf, voices and all.