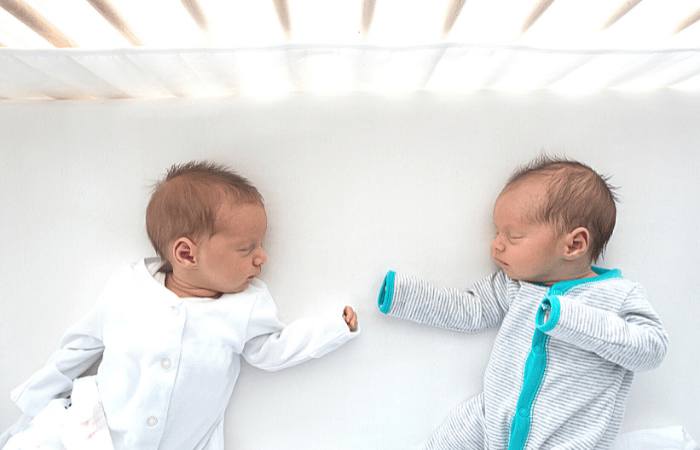 A mom of twins shares her struggle with a partial molar pregnancy, a very rare occurrence with twins, and how they all survived cancer-free.

Walking into the office that day was just like any other appointment. We’d had had years of infertility appointments, months of obstetrician (OB) appointments and now we were going to a high-risk OB to check some things out.

After our long infertility journey, we had finally gotten pregnant with twins through an IVF cycle. We were over the moon, to say the least. During an OB visit, they noticed a mass on one of the sonograms and decided to send me to this high-risk OB since I was at four months and was carrying twins.

Our day seemed normal as we walked into the doctor’s office and I put my gown on, my husband sitting patiently beside me hoping for a glimpse at our little guys. The doctor did the sonogram and asked a few questions about our fertility problems, IVF, and when this mass had appeared. We said that we thought it had been there since day one. Originally we were told it was twins, then maybe a triplet, then a vanishing triplet, then nothing but a mass…. a mass that no one could tell me what it was. And it was growing.

A partial molar pregnancy is serious

There was a sense of urgency in his voice and a baffled kind of excited look in his eyes. “You have a partial mole,” he said, explaining that it was extremely rare to have a fetus survive alongside a mole. And that moles can sometimes cause cancer.

WHAT? How did my dream pregnancy take such a bad turn?

He walked us out and stopped us at his computer and Googled “partial molar pregnancy“. He showed us what it looks like and showed us our mass… it looked the same. He told us to read up on it and return every other day for follow-up visits until delivery.

We walked out and drove home in silence. It felt like an eternity. From what we gathered from what he explained to us (or rather his lack of explanation), the mole would most likely attack the boys’ placentas, which would cause us to lose both of them, and then I would end up with cancer.

We felt no compassion from him, no “We’ll get through this,” no “It’s ok – we will do everything in our power to save your boys.” Nothing. He threw out words like attack, lose, cancer, and chemo.

We talked and cried and called our parents to break the news to them.

Support from your doctor is crucial

I worried and researched. It felt like I had an enemy inside my body trying to take the one thing I wanted most in this world: my children. I felt like that doctor had single-handedly stolen all the happiness from our pregnancy and left us with a lot of uncertainties. On our next visit to our regular OB, we told him what the report was from the other OB.

He was shocked. It is practically unheard of for two viable fetuses to survive along with a molar pregnancy. He was angry about how the high-risk doctor had told us the news. He calmed us in his soothing voice and told us “We will get through this!” Then he disappeared. The nurse came in and told us he ran upstairs to give the high-risk doctor a piece of his mind for scaring us like that! Ha. Way to go, Dr. Mendez!

A partial molar pregnancy is a variation of a molar pregnancy, an abnormal pregnancy in which an embryo (the fertilized egg) either developed incompletely or doesn’t develop at all. Instead, a cluster of grape-like cysts (known as a hydatidiform mole) develops in the uterus.

The rest of my pregnancy was rocky. Besides constant nausea, the worry was always there. We were told that at any time the mole could attack the boys’ placentas. If that happened, we would do an emergency C-section to try to save the boys no matter how early it was in my pregnancy. How do you walk around in daily life knowing there is something inside you that could possibly hurt or kill your babies? You can’t do anything to protect them! Your one job in life is to protect those babies and you have no control over it.

We made it through our partial molar pregnancy!

Slowly but surely we made it. We made it to 36 weeks! At thirty-six weeks the boys were healthy and the mole had stayed away from them! Now to get the boys out and get rid of that nasty molar.

As my husband held both babies, I looked over at my two doctors and watched as they continued to work and remove the mole. I was told it was sent to the University of Texas-Southwestern University to be a case study due to the fact that it was so uncommon to be found in a twin pregnancy in which all parties involved survived.

I was so happy to know it was gone.

For one year after it was removed, I did weekly tests for a month, then monthly tests for the remainder of the year. We did abdominal CT scans and ultrasounds and blood work to test my HCG levels. If my HCG levels stayed high or went back up that would mean the mole had dropped particles of cancer inside me and I would have to start chemotherapy. Luckily, it never did! My HCG levels continued to decrease and no cancer signs ever showed.

At their first birthday, I knew how lucky we were to have them and how fortunate I was to be healthy. It was truly a celebration of health and life. Still, to this day whenever we discuss the molar pregnancy with two viable fetuses with any doctor, they are shocked.

Going through infertility and thinking that you will never be able to have children gives you such a deep appreciation for those children if they actually arrive. Going through a pregnancy not knowing if they will make it due to something inside of you gives you an even deeper appreciation for those children. I look at them and I cannot believe what they made it through before they were even born. They had so many opportunities to not be here.

Sometimes we get wrapped up in everyday life and forget how precious that life is. I hope to never forget how much our boys were able to overcome to be here with the Mommy and Daddy who wanted them so badly.

I know IF the “third baby” had formed, he would have been severely handicapped. But I also wonder what IF he had all the correct chromosomes and made it out healthy? There would be three. Kase and he would be identical twins and Kingston would be the fraternal triplet! Life would be drastically different. I imagine him and life with two of my little Kase, who is so opinionated, active, and such a comedian.

It’s strange to miss someone who never even truly existed.

Mikenzie Oldham is a full-time twin mommy, a full-time wife, a full-time employee, a full-time maid, a full-time chef, and a full-time writer. Juggling life as a twin mommy in a kid-centric world, she survives all this with a steady intake of caffeine and wine. She has perfected the phrase “don’t hit your brother” and her main expertise is cleaning mud out of someone’s ear, kissing “owies”, and finding four shoes.

Check out all her boys’ shenanigans at meandallmyboys.wordpress.com