Home » Pregnant with Intense Itching? It Could Be Cholestasis 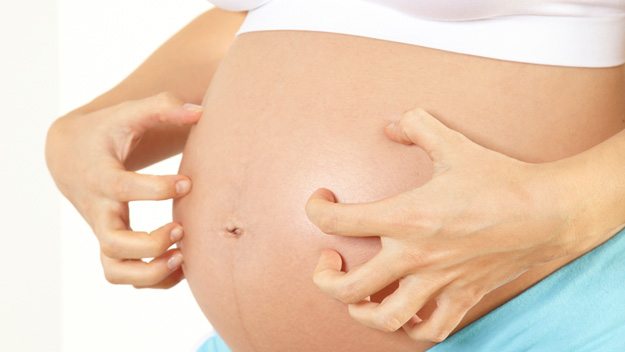 Having intense itching on your belly with pregnancy? You may have cholestasis of pregnancy, which is a serious condition that needs medical treatment.

I was sailing into my 35th week of pregnancy, finally on leave from work and hoping to get a lot done while I “rested” at home. And then the itching started, hours after my weekly ultrasound.

At first, I chalked it up to stretching skin (boy, did it stretch!), but then it moved to the palms of my hands and the soles of my feet. And when I say “itching,” I mean that I was going out of my mind trying to make it stop. I think I got all of an hour of sleep that night as I tossed and turned in agony. It had to be SOMETHING wrong, so I did exactly what all the doctors tell you not to do: I Googled it.

One of the first things that popped up was cholestasis of pregnancy. Mayoclinic.org has this to say on it:

Gulp. Needless, to say, I called my doctor’s office first thing in the morning. The reaction I got was less than concerned. The nurse on the phone sounded a bit incredulous.

I stressed that I was on the verge of going insane from the itching, and so she set up an appointment for two days later. Maybe it wasn’t anything serious after all? But as the itching continued, I knew something was wrong.

Two long days followed, along with two even longer nights. As the Mayo Clinic website said, “The itching may be worse, even intolerable, at night.” Intolerable, indeed.

Thankfully, my doctor took me much more seriously than the nurse on the phone. As it turned out, my doctor was extremely concerned, but she hid it well. My suddenly sky-high blood pressure didn’t help either.

“I’m going to send you to L&D for some tests. You might go home, or you might be having these babies sooner than we thought.”

Several tests and not enough hours later, liver tests confirmed cholestasis and my blood pressure led to concerns of preeclampsia. The doctor on duty thought she was funny: “I see you’re scheduled for a c-section in three weeks,” she said, as though everything was fine. “Yeah… that’s going to happen today.”

My thoughts flashed to my iced coffee on the counter at home, left there to be finished upon my return from my appointment. And to my cats, who I’d promised to give treats to when I got back (little did we know Hurricane Sandy would make my return home a few days later less than pleasant).

It was time. I was in the operating room so quickly I didn’t have time to panic, other than telling my husband to call my mother, pronto. Twenty minutes later, I had two beautiful, 5-pound babies in my arms.

While they tell you not to play doctor and search the Internet for information about symptoms, as you’ll always think the worst, I am beyond glad that I did. I informed myself of possibilities and made sure I was seen by a doctor and that they tested for cholestasis. My babies entered the world healthy and safe as a result, if a little earlier than planned!

Signs and symptoms of cholestasis of pregnancy may include:

Often, however, intense itching — particularly on the palms of the hands and the soles of the feet — is the only symptom of cholestasis of pregnancy. The itching may be worse, even intolerable, at night. The itching is most common during the third trimester of pregnancy, but sometimes begins earlier.

A friend of mine, who happens to be a labor and delivery nurse, had similar symptoms several months later. As a nurse, she’d seen a few cases of cholestasis, but because it is so rare she had real concerns that her own colleagues wouldn’t take her seriously or test for it. She hesitated to make a big deal out of it, but eventually the agony was so bad she went in to L&D to get checked out.

Smartly, she printed out pages of information, including the specific tests they should do, to back up her case. Lucky for her, it wasn’t needed and her worries were unfounded. But the fact that a nurse had concerns about being heard by her own coworkers makes my point even clearer:

You have to be your own advocate, especially during pregnancy when you are also advocating for your baby or babies.

Your symptoms might turn out to just be the result of some crazy skin stretching or something you ate, but you don’t know for sure until you speak to your doctor. Cholestasis is nothing to laugh at, even if the symptoms sound silly. In my friend’s case, she was able to monitor her levels and use medication to carry her baby girl to 37 weeks.

If you are worried about anything at all, pregnant or not, call your doctor. Peace of mind is well worth it if you are wrong, and getting medical attention is more than worth if it if your concerns are justified.

Approximately one percent of women will develop an itchy, raised rash in the last part of their pregnancy called PUPPP (pruritic uticarial pupules and placques of pregnancy), also known as polymorphic eruption of pregnancy. According to the American Academy of Dermatology it is the most common skin condition of pregnancy, usually appearing during the third trimester, and, although the discomfort and itching may keep you up at night, PUPPP is harmless to both you and your baby. Please consult with your doctor if you believe you have PUPPP or cholestasis.

A note from Twiniversity member Jenny

Pregnant women might also want to be aware that intense itching in pregnancy could also be Gestational Pemphigoid. Extremely rare, only 1 in 60,000 pregnancies in the US. I got it in my 28th week, took 4 weeks to diagnose, and my girls were taken by C-section in my 36th week. PG causes the intense itching and burning all over the body and when the liver levels come back normal so doctors know it isn’t Cholestasis, it is often misdiagnosed as PUPPP.

The difference is the skin will eventually bubble and blister. A skin graft sent to a specialized lab will fluoresce which proves PG and not PUPPP. Mine was finally diagnosed by a high-risk OB when I broke down in my doc’s office begging them to do something. The high-risk OB took one look at me, admitted me to the hospital that afternoon (I was her 3rd case in 32 years of practice) and started me on massive amounts of steroids which stopped the blistering, burning, itching etc. in 1-2 days.

Unfortunately, it often comes back “with a vengeance” after delivery. Mine came back on day 4 after delivery and I had to remain on steroids for 7 more months until it was manageable without medication. Although it isn’t harmful to babies, PG has a 92% chance of coming back in subsequent pregnancies, usually earlier (1st trimester instead of 3rd) and more intense. And it often flares up with monthly menstrual cycles. Longest case on record so far is 12 years after birth. Mine came back for 4 years. It was awful.

Since PG is so rare, if you are having these kinds of symptoms and you don’t test positive for Cholestasis, be your own advocate and push for a visit to a high-risk OB or even a dermatologist. I was going crazy and thought no one believed me that I was in constant pain. Yes, it was horrible but now I have two amazing and perfect girls to show for it!

A note from Twiniversity member Ashley

I had OC (obstetric cholestasis) and usually, the itching starts in the hands and feet. I rarely had my belly itch. The worse it got, the more it spread to my arms, legs, back and head. It seemed like my belly was the last place it went. I have talked to other moms who have experienced OC and they also have it start in the hands and feet.

April Rondeau is an editor and writer as well as a mother of 16-month-old boy-girl twins. She loves reading, photography, movie marathons, popcorn, and wine.

PUPPP Rash and How to Treat It

4 Weird Pregnancy Symptoms Nobody Warned Me About