Home » Doing It Solo: A Single Parent of Twins Story 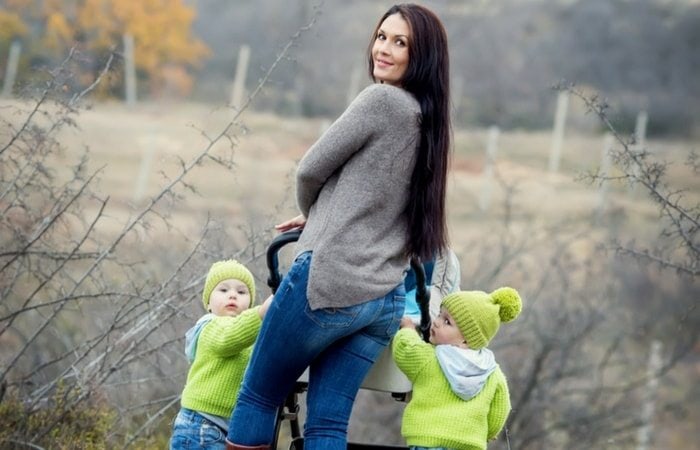 Becoming a single parent of twins by choice can be difficult. Read how this twin mama did it with some help from some special people in her life.

For many, becoming a single parent of twins is an unplanned, and often traumatic, event. Most of us picture sharing parenthood with a partner, but it doesn’t always work out that way. Some women bear their children without a present father; others (moms and dads) face the dissolution of their relationships or the death of a partner; still others, like myself, become single mothers or fathers by choice, using sperm and egg donation.

In my case, my parents are no longer with me, and my brother lives an hour and a half away (soon to be much more), so I have had to navigate most of this parenting gig alone. On the positive side, it allows me to make the decisions that I feel are best for my family, without worrying about any interference. The independent side of me loves that.

However, not having my parents around, or much close family other than my brother, can make for a lonely experience. So many times I have been desperate to ask my mom’s advice, or even just to ask her what I was like as a baby/toddler, so I can know if my strong-willed daughters are just cosmic payback!

It also means that I almost never get the benefit of free childcare, so I really need to plan my babysitting carefully, and use it sparingly. single parent of twins

As any single parent of twins knows, creative problem solving is a must. One of my most creative solutions since having my girls was finding a way to be a stay-at-home mom, despite being single.

I had the benefit of some money that I received after my parents passed away, and I chose to sell my apartment and rent elsewhere, so that we could live off that, while I tutored online part-time.

I’m grateful to have had the opportunity to be with my girls for these early years, but I know that it is time, both financially and developmentally, for them to go into a pre-school program and for me to go back to work full-time. This is my current biggest stress, as finding a job has proven difficult so far, and I often worry about my ability to continue to support my girls. single parent of twins

My saving grace through it all comes in the forms of friendships. From the very start, friends, both close and casual, came through for me in too many ways to count.

When I was choosing a sperm donor, I decided to involve a few close friends in the selection process. So I hosted a cocktail party at which we set the donors from two banks in competition against each other, using a bracketology system. I called it “Sperm Madness.” It was a fun night, and I was intrigued to see that my friends narrowed down the donors to the two top contenders that I had secretly pre-selected.

However, it was after my girls’ birth that the true scope of my friends’ commitment became clear. Like many twins, my girls were premature, and spent six weeks in the NICU. For the first two weeks, I was unable to drive, so I needed rides to and from the hospital. single parent of twins

Within an hour of posting a call for help on Facebook, I had rides lined up for the whole two weeks, from friends, cousins, former students, and even old skating friends that I hadn’t seen in person in years.

When it came to support within the NICU, I faced a somewhat unique challenge. Our NICU provided bracelets for the Mom and Dad to have 24/7 access. Parents could then name up to four people who were allowed to visit during normal visiting hours. Typically, these four people would be the grandparents.

I spoke to NICU chief and informed him that there was no dad, or any grandparents, so I wanted to give my brother the other set of bracelets, and select four other people for what I called my “velvet rope list.”

He gave it some thought and ultimately agreed, so I selected my father’s cousins, who had been there the night the girls were born (and serve as godparents to one of them), a close friend (OK, OK, my high school prom date!) who lived near me, and who I knew would give me rides and general support if I needed it, and finally my close childhood friend who threw my shower, and who agreed to be in the delivery room with me (she also serves as godmother to the second twin).

The staff admitted that it was the most unusual NICU visitor list that they had ever seen. Even a few months later, when both girls came down with RSV, my friends rallied again, caring for one at home, while I stayed with the other in the hospital (until the second was admitted as well).

Naturally, I do need to rely on myself for most things when it comes to raising my girls, but I don’t really mind that. In fact, it’s often a point of pride for me to be able say that I have done most of it alone.

However, in the two and a half years since their birth, my friends and family have continued to come through for me. From my brother allowing us to stay with him for a while (so that I could save more money to stay home with the girls) to the friend who has spent more time in my dentist’s waiting room, watching my kids, than she has in her own dentist’s office, they have never hesitated to help me out.

And can we talk about friends who have been willing to go on vacation with us? I love to travel and didn’t want to stop just because I had kids. And while I’ve road-tripped many times solo, flying on a major vacation with the twins was not something that I wanted to do alone at such a young age. Amazingly, I have always found someone to travel with us (some even more than once!) Talk about going above and beyond!

And that high school prom date? He lived a mile from me that first year and proved to be an amazing help. No, really – some nights he stayed up with them until 3 AM, so that I could sleep, and then just let himself out and went home for a couple of hours sleep before commuting to work the next day. That’s friendship!

As grateful as I am for this help, I also tend to feel a little guilty. First of all, I hate asking for help, and often feel like I have no right to ask for help with something that I chose to do. But just because I chose it, that doesn’t mean that it’s not still hard, and I do need help from time to time.

The bigger issue is something that I discussed with a close friend. She spends a lot of time with us, travels with us, and has come through for us in more ways that I can count.

One day I told her that I was worried about “friendship equity” with her, and with other friends who have done a lot for my little family. I often feel like I am at the wrong end of the friendship equity scale – always receiving the benefits and not being able to reciprocate like I would want.

The truth is that I can rarely repay what my friends have done for us. After all, a good 90% of the time, I still have two toddlers with me. I try to still be a good friend, and I know that my friends are not keeping some sort of tally of what they’ve done for us. But I hope that they know that I am here if they need me, just as they have always been there for me. And I hope that, as my girls grow and become somewhat less dependent on me, I will be more able to step up when called. single parent of twins

These people have been my “village,” as the expression goes, and they have made the journey of single motherhood a little less solitary. I’m about to leave that village though, moving my family from the East Coast to the West Coast, where I know almost no one. single parent of twins

Assuming we survive the cross-country drive, we will be starting over in sunny Southern California, where I hope to get a new job and provide a new, exciting life for my girls. It’s scary, but I know in my gut that it is the right choice for my family at this stage.

We may not have our village in person out in California, but I know that we will have their virtual support, and my girls will always know the people who have made such a difference in our lives. single parent of twins