Home » Can We Talk About Three-Year-Old Twins? 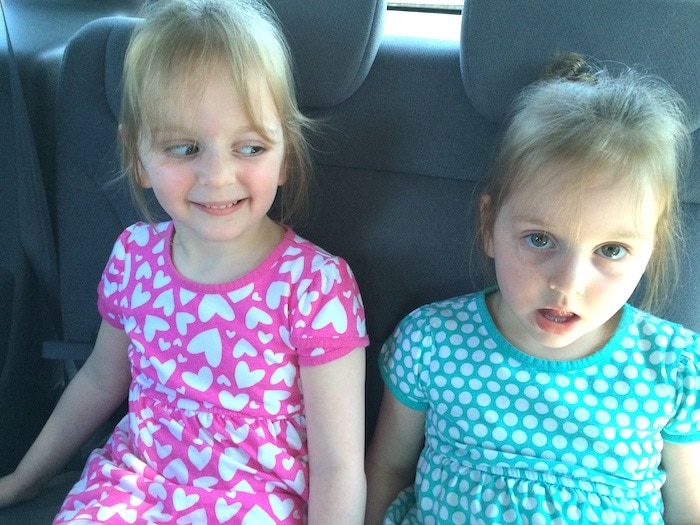 Three-year-old twins are a challenge, to say the least. A mom of twins shares her struggles and triumphs throughout her twins’ third year.

I remember hearing all about the “terrible twos” when people would talk about young children. Age two with twins definitely wasn’t easy, but, in my experience, age two was much more manageable than age three. No one warned me about three-year-old twins.

My husband and I usually both try to attend our twin girls’ yearly check-ups with the doctor. For their age three wellness check, I had to work late, so I planned to meet my husband at the doctor’s office. When I arrived, he had already taken the girls into their appointment. One of the nurses took me back to meet them.

This is three-year-old twins

I remember how my girls looked when I walked in the door. They were wearing purple cloth medical gowns, their hair was in pigtails, jumping and dancing around on the floor as the doctor was speaking to my husband. The doctor looked up at me when I came in. “This,” she said, gesturing to my smiling, jumping toddlers, “is age three. This is what three looks like.”

My twin girls are seven now, and age three has been by far the most difficult age. I want to give a heads up to other twin moms that while age three might feel like the hardest things have ever been, you all WILL get through it. These are some of the reasons why age three was difficult.

Before I was a parent, I just assumed that children potty trained at some point during age two. I never imagined that three-year-old twins might still need diapers. Little did I know that my kids would be three-and-a-half before they were using the potty regularly during the day, and it was even longer before they didn’t need to wear Pull-Ups at night.

When they were age two, I started having my girls sit on the potty throughout the day. One of my daughters pooped in the potty once, and then was terrified to do it again for more than a year. My other daughter didn’t feel comfortable going in the potty. She would sit on it and “try,” but for whatever reason, she would not pee or poop in the potty. By the time they were three-and-a-half, I’d had just about all I could take of the poopy diapers.

My three-year-old twins stopped wanting to go to bed at night. We had some bedtime difficulty throughout age two, and then when they turned three, it only seemed to ramp up. We gave up trying to get them to bed by 7:00 or 7:30 and started trying for 8:00. Whatever time we started didn’t seem to make a difference. Our three-year-old twins never went to sleep easily. They would cry and get out of bed repeatedly. Every night they would call for us to come in and would tell us they had poopy diapers. Whatever the reason, bedtime would last from 8:00 until 9:00 or sometimes even 10 before they would finally fall asleep.

While this might be frustrating on its own, my husband and I are both high school teachers, and we desperately needed time in the evening to grade schoolwork and plan lessons for the next day. Each minute of delayed bedtime cut into our work time. This cut into our sleep time, which resulted in a lot of crankiness and frustration for everyone.

They didn’t happen all the time, but I think most of my children’s tantrums happened during age three. This is an interesting time because children are learning the words they need to verbalize their emotions, but sometimes the emotions come on so strongly that the only way they can be expressed is physically through sounds and motions.

One of my daughters would almost lose control of her body. If I was holding her and she got upset, she would suddenly tip backward, as though she had lost the ability to hold herself up. Fortunately, after the first time, when it surprised and terrified my husband and me, we learned to expect it and could support her back before she ended up upside-down.

The fighting with three-year-old twins

Age three is also the first time my twins really started fighting about toys, having to take turns, and who got to do what first. Before this, they were just too little to notice or to think much about who took the first bath or who sat next to Mom during church. At some point with three-year-old twins, they both became very aware, and they were also convinced that the other twin was always receiving preferential treatment. Unfortunately, it’s incredibly difficult to rationalize things to three-year-old twins.

I didn’t write this just to make all of you parents of young twins fear what’s on the horizon with three-year-old twins. I want to give you hope if you find yourself dealing with any of these difficult situations.

They DID learn to use the potty

Right around age three-and-a-half, long after part of me felt like it would NEVER happen, my daughters started using the potty. The first one did, and then very soon the other one did. Maybe because they were so late when they finally started, they had hardly any accidents once they began using the potty. A few months later they started asking to wear panties at night instead of their Pull-Ups. And again, we had very few night time accidents. Suddenly we weren’t buying Pull-Ups anymore.

Shortly after my twins turned four, they stopped taking their afternoon nap. They would still lie down at daycare during the week, but they didn’t always fall asleep. On weekends we could hardly get them to lie down at all. While part of me was sad to lose nap time, the positive side was that they finally started going to bed at night. Things didn’t get better instantly, but I noticed that we started having to go back into their room fewer times after putting the girls to bed. Gradually they started falling asleep sooner, and my husband and I were able to get our schoolwork done in the evenings again.

Behavior improved for my three-year-old twins

We worked out a system for taking turns with our three-year-old twins: even and odd days. I had learned about this from hearing an interview with Betsy Brown Braun, child development, and behavior specialist. When there was an opportunity for one of the girls to get to do something first or to choose something if the date was an odd number, Twin A would get to go first or make the decision. If the date was an even number, Twin B would get to go first or decide. This helped with consistency, and my girls accepted those guidelines without arguing. It took the emotion out of the decision making and cut down on arguments.

When my twins were three, I’m not sure anyone could have reassured me that things would get better. I remember sitting down at my kitchen table after cooking dinner, feeling drained and defeated. Sometimes I cried because I was so tired. Everything felt so hard. I didn’t realize that age three is hard for a lot of parents. It’s doubly hard for parents of twins. I also remember having a moment of realization within a month of my girls turning four and thinking, “Wow. This doesn’t feel as hard anymore.”

Feel encouraged, you parents of three-year-olds who are currently in the thick of it. They won’t be three forever. And at least for me, age four felt a lot easier.

Ica Rewitz is a high school English teacher in Washington State.  She is married to a high school science teacher, and they have twin girls who are currently seven years old. When she isn’t mothering and teaching, Ica enjoys hiking in the mountains, reading books, and writing for her blog Twins Happen at  twinshappen.wordpress.com.

Threenagers: Does it Get Any Easier?

5 Things I Have Learned About Three Year Olds