Home » PeaPod Has FINALLY Been Recalled 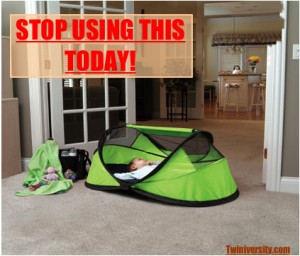 BREAKING NEWS: With a heavy heart Twiniversity proudly reports that the PeaPod Travel Tent by KidCo has been officially recalled. After the horrific tragedy within our community last holiday season, the family, along with KID, have been tirelessly working to ensure that the death of a child was not in vain.

The Consumer Product Safety Commission (CPSC) announced today that KidCo Inc, of Libertyville, Ill., is announcing a voluntary recall of about 220,000 PeaPod and PeaPod Plus Travel Beds due to a “Suffocation, Entrapment Risks”.

The CPSC says “Infants and young children can roll off the edge of the inflatable air mattress, become entrapped between the mattress and the fabric sides of the tent, and suffocate.

CPSC is aware of a death of a 5-month-old boy in December 2011 in New York, New York, who was found with his face pressed against the side wall of the tent. The cause of death was not determined.”

Unfortunately in addition, the CPSC is aware of six more reports and Health Canada is aware of three reports of children who became entrapped or experienced physical distress in the product. Two of the six reports included infants who were found crying underneath of the mattress that had not been inserted into the zippered pocket on the bottom of the tent.

The KidCo PeaPod Travel Beds and PeaPod Plus Travel Beds are small, portable sleep tents marketed for use by infants from birth to 3+ years, depending on the model. The tents have a zippered side for putting in and taking out the child and have an inflatable air mattress that fits into a zippered pocket underneath the floor of the tent. The tents fold into a compact round shape and come with a fabric bag for storage and transport.

The following models and corresponding tent fabric colors are included in this recall:

The model number can be found on a small tag on the underside of the product.

The travel tents were made in China and sold at independent juvenile specialty stores nationwide and online at Amazon.com from January 2005 through the present for between $70 and $100. 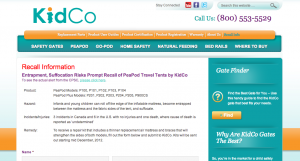 Consumers should immediately stop using the tents and contact KidCo to get a free repair kit. The kits will vary depending on the model and will be shipped to consumers starting in December 2012. Contact KidCo toll-free at (855) 847-8600 between 8:30 a.m. and 5:00 p.m. CT Monday through Friday or visit the firm’s website at www.kidco.com and click on Recall Info to receive the kit.