Home » How Do You Sleep Train Twins In the Same Room? 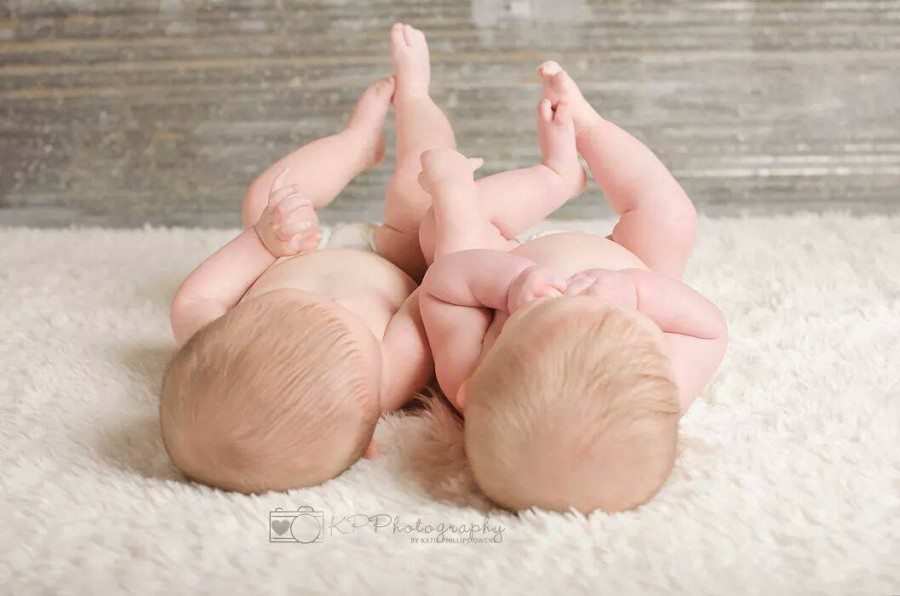 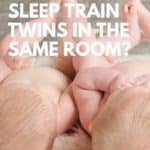 How do you sleep train twins in the same room? Our Twiniversity moms offered their tips and advice when you can’t split them up and need a break!

A MoM asked, “My boy/girl twins had their 6 month check up this week. The doctor said they no longer need to have a bottle in the middle of the night. He suggested letting them cry it out, and I’m ok with a gradual cry it out, but how do you sleep train twins in the same room? If one baby is more likely to sleep through the night, I don’t want the other baby keeping them up. I don’t have an extra room to separate them. Suggestions welcome!”

Our Twiniversity community came to the rescue with tons of great tips and advice for this sleepy MoM!

-I was terrified about this. My boys are 14 mo now, still sleep in the same room, 12-14hrs solid. I did sleep training at 6 mo. It only took about 3 days for them to stop waking each other up. Now if one is teething or has a cold and wakes up crying the other one sleeps through it. I guess it’s a twin thing. No advice really except it is possible. Just give it a try for a few days first. Good luck mama!

-Ours were 15 months when we got rid of nighttime feedings. It took 3 nights. We started on a Thursday night…they cried for 1 hour, 2nd night 30 min…3rd night…not a word! I had to turn the baby monitor off, I could still hear them (our rooms are across from each other). It sounds so much worse than it actually is. We have 1 that cried more than the other, if our other boy woke up he would fall back to sleep.

-When our boy/girl twins were around 4-6 months dad went in for the night feeding one night, changed them and laid them back down. After that for a couple nights they stopped waking. Once in awhile I still do a night feeding and if one wakes I wake the other up to eat so I can get some sleep. Good luck. I say go with your mama instinct. A little crying is ok; you’ll know when its too much for you.

-All twins are different. Do what works for you and them. My twins are very different, one had colic and fussed every night. Once we got them on the same schedule, that’s when they started sleeping longer, through the night, and no more night time bottle feedings. Do what you feel is best for your family. sleep train twins

-What worked for our boys was patience and persistence. We also had no other room to separate them and we always planned that they’d share a room, so it just made sense to sleep train them together. We started at 5 months old by slowly eliminating nighttime bottles, first the 2 am bottle, then the 10 pm bottle. We would slowly make their night bottles more watery until it was only water, which took about 5 days. They just stopped waking to eat because it wasn’t worth it for them and they had their pacifiers which made a huge difference. We were also giving them more to eat in the last bottle of the night (6 pm). After that we started leaving them in their cribs to cry, going in every 5, then 10, then 15 minutes etc. to soothe. After a week of this, we realized we were getting nowhere fast. Finally we moved to traditional CIO (cry it out) because we were desperate. The boys would take turns being up and crying, and sometimes they would wake each other, but around the 3rd night they learned to sleep through each other’s cries. Their cries were more of a whiny cry, not a seriously sad cry, so that was easier to deal with. I had the monitor by my bed all night and would watch to make sure they were ok, which they always were. It was hard, but on the 6th night they both went to bed together and slept straight through. It was like a miracle! I’m so glad we stuck to our guns because I knew in my gut THEY were ready, which I think is key for sleep training. sleep train twins

-With a white noise machine and two cribs (each with their own crib toy that switched every couple of days) mine let the other sleep, no problem. With the crib toy, by 6 or 7 months they didn’t cry when they woke up, they just played and went back to sleep. The trick for me was that even when they cried, I’d soothe them without holding them. Once they went down for the night, they only got soft songs, back rubs, pacifiers, crib toys…. all with them in the crib. Mornings I’d make a big deal about “now it’s time to come out!”; not at night. After about a week, no more tears (except teething tears). They got it pretty quickly. I’m a single mom who needed her sleep! I get it. sleep train twins 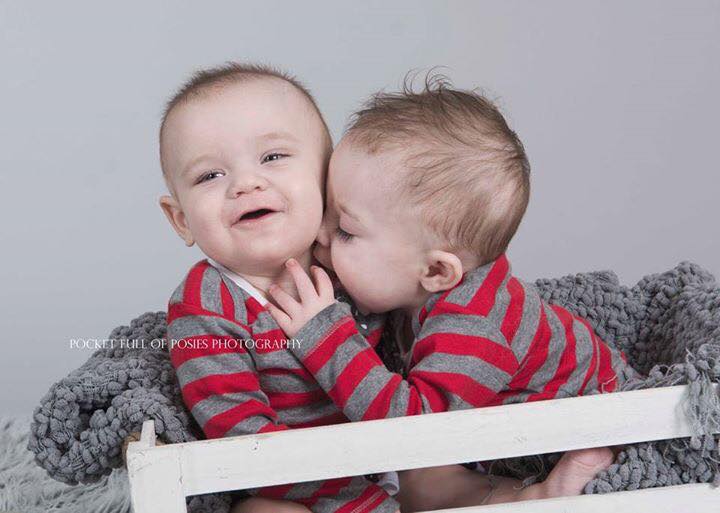 -We read the “12 hours of sleep in 12 weeks” sleep training book (some good tips, don’t agree with all the info) about 1.5 months ago. My boys just turned 7 months and after taking a month to space out their daytime feedings to every 4 hours my boys naturally eliminated some of their nighttime feedings on their own. My chunky baby went from 3 feedings a night to 1 and my little guy is still getting up 1-2 times a night, but right now I really believe it’s because he’s hungry. We’re just making slow changes with our boys and do “limited” amounts of crying with reassurance when they wake up more often. We’re slowly introducing solid food (veggies) as well & that seems to be helping.

-My b/g twins are now 3 but I had a calm baby and a *very* fussy baby. My calm one never seemed to be bothered by the fussy one. I nursed mine in the middle of the night until they stopped waking up to eat… About 8-9 months. I feel they will graduate to that on their own! Do what you feel right doing. sleep train twins

-We’ve had our girls (2 1/2 years) in the same room from day one. Usually they sleep through the other crying. I feel doctors are there to guide us because they obviously have more knowledge than us, but moms know more about what’s going on at home than doctors do. Like what’s best for all of you. If you wake up in the middle of the night hungry, do you go back to bed? You probably get a snack. Maybe try treating it like that. Not a full bottle. I try to listen to hear if their tummy is grumbling. If you try something and you don’t feel it’s working, it’s ok. It may take trying different things to find what is going to work. sleep train twins 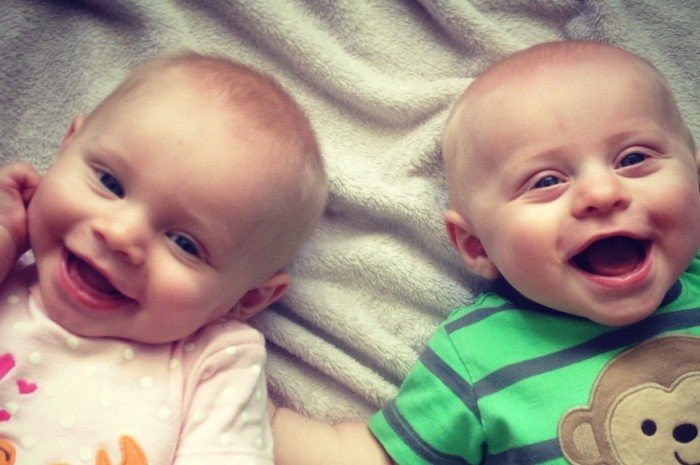 -We just did this recently. Believe me it is doable and they generally sleep through whichever one is feisty at the beginning. We don’t have separate rooms and they were fine. We didn’t do it till they were 15 months and wow do I wish we had done it earlier. First night they cried 40 mins. We kept going in longer periods of time and they finally went to sleep. 2nd night 20 mins. 3rd night one twin went straight down and the other hung in there less and less time for another week. Now they both sleep straight through 12 hours 7-7 unless they are sick or teething. sleep train twins

-My boys share a room and are 15 months now. Around 9 months I did a modified “cry it out” with both. When one cried, I’d pick up and soothe and put back down, then wait 2 minutes. If still crying, pick up soothe, back down and wait 4 minutes, then 6, 8, etc. it worked after doing it consistently for about a week. One learned to sleep through the other’s crying and still does. sleep train twins

-My 5 month old girls share a crib and a room. They are finally starting to sleep a few nights a week through the night but it is still very inconsistent. Most of the time they will sleep through each other’s cries, although I tend to race in to prevent the other from waking. The way I see it is that they are waking for a reason. If it’s only happening once a night or a few times a week and not every couple of hours every night I say it’s ok. As desperate as I am for sleep, as I had really bad insomnia through this pregnancy and have 2 older singletons to take care of, I’m not going to let them cry it out. Their bodies will slowly not need to be fed, as did my boys. Hang in there! Feeling like a walking zombie is not easy! sleep train twins

– My twins are 6 months old, and have been sleeping through the night for over a month now. It is GREAT! When we first started, we would give them the pacifier as soon as they start waking up, if you wait too long they won’t go back to sleep until they get a bottle. So we were catching it when they first started waking up and we’d give the paci, and that was it! Now they sleep through the night.

– My kids slept in the same crib till 5 months and now at 9 months sleep in the same room. They are used to each other crying so we don’t have an issue. Our biggest challenge now is the door sticking and waking them up!

Sleep Training Twins: It’s a Marathon, Not a Sprint

How Sleep Training Worked for Our Twins