Home » My Babies Went Home Before Me: My Postpartum Complication 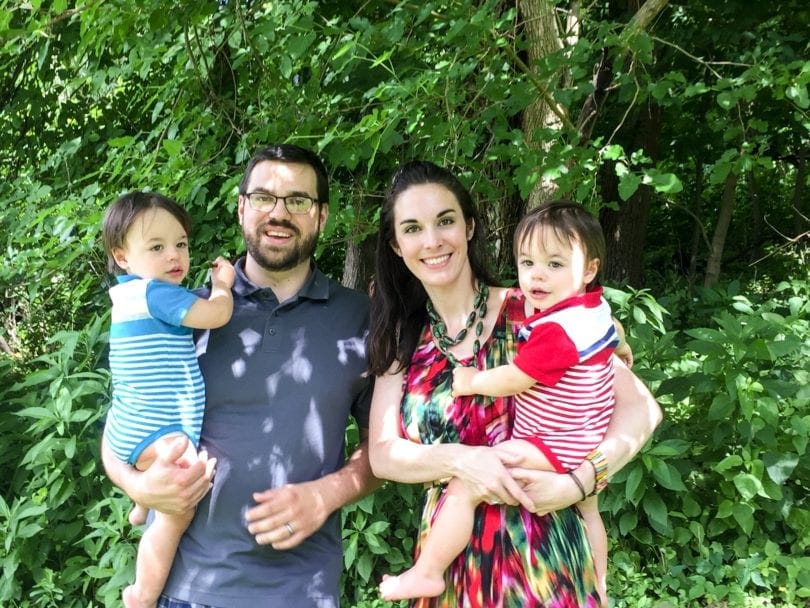 A postpartum complication is very stressful, especially if your babies make it home before you. One mom shared her story when it happened to her.

My postpartum story is perhaps a little different than others. I have Crohn’s Disease with multiple surgeries in my past.  My medical team was not sure how I would handle giving birth, but plenty of women in my shoes have had perfectly healthy pregnancies.

My team of doctors discussed many different risks and benefits to both natural and cesarean birth options. What I finally decided was to have a C-section in order to avoid any trauma that could result from pushing.  What actually happened was something that no one discussed with me and is apparently quite rare.

The C-section went quite well.  It was planned at 38 weeks and my baby boys were perfectly healthy. I spent all day with them.  I ate dinner and stayed up most of the night holding them. I got to enjoy 24 glorious hours with them before I started vomiting uncontrollably.

I remember not knowing what would happen if I did not hold my stomach as tight as I could while my muscles contracted viciously around the incision.  Would my stitches rip open? Would my guts fall out? I had no idea! The pain was unreal.

The doctors were not as concerned about the actual vomiting as they were about what it meant.  I assumed that it had something to do with my Crohn’s Disease.

After a while, it was all a blur. I was given painkillers to help deal with the intense cramping. I underwent x rays, CT scans, and probably an MRI, but I don’t remember.  I was diagnosed with an ileus.  In retrospect, it could have been worse, given my Crohn’s history, but I was left to deal with an ileus none the less.

An ileus is a temporary absence of the normal contractile movements of the intestines and thanks to modern medicine it is truly not life-threatening. To be clear, an ileus can happen to anyone undergoing abdominal surgery, but those of us with bowel issues have a higher risk. Regardless, it is considered rare.

When you go under anesthesia for surgery (or a spinal tap or epidural for the C-section) your intestines fall asleep and when you wake up your intestines do not resume normal function.  When your intestines don’t wake up and you start eating, the food can’t go anywhere but back out the way it came.

The doctors started insisting that I get a nasogastric (NG) tube to suction out any food, liquid, or gas left in my digestive track.  I’d seen patients with these tubes down their nose before and I did not want to have one, but after one final vomit, I agreed.

The first tube didn’t go down easily and they had to take it out because my nose started to bleed and I couldn’t breathe.  An hour later, they came back to try again. This time they had a pediatric sized tube. It got bunched and failed. Finally, the third tube went down successfully and I became attached to yet one more apparatus in my room in the ICU.

It was another day before I even got out of bed.  I do not remember how long it had been since I’d seen my babies. My husband probably brought them down to visit, but I don’t remember. He spent time in the nursery with them so that I could rest.

Four days after the birth of our boys, I was up and walking around (IV and NG tube in tow).  I got to take a shower and sit out in the courtyard. The next day, my boys were discharged by dictation of the insurance company.  Healthy babies can only stay in the hospital for so long, regardless of the mother’s health status.

That first night when my husband took the boys home and I was left alone at the hospital was surreal and sad. I’ve spent my fair share of time in the hospital, but watching my babies leave without me was painful. Thankfully, we only lived 20 minutes from the hospital, so I was able to see them each day for a few hours. With the help of the lactation team, I started pumping as soon as I could and would give the boys a chance to nurse when we were together.

I assumed I’d be going home that Sunday and when the doctors told me I wasn’t ready, I was devastated.  By Monday morning I couldn’t keep it together. I started crying when just about anyone came into my room.  I may or may not have told the doctors I was doing slightly better than I was, but they finally let me go home Monday afternoon.  What a relief it was to be home; to be able to hold my babies without tubes coming out of my body.

I think back at that time and there are so many things I wish I could have done differently.  I wish I could have had the chance to discuss the risk of an ileus and perhaps my decision to have a C-section would have changed.  The repercussions among an 8-day hospital stay and being separated from the boys also included the inability to make enough milk for the boys.  I may not have had a good supply either way, but I’m guessing a week without eating solid food (IV fluids only) and sporadic moments with my newborns didn’t help.

Over the next few weeks, I was left to deal with a very small appetite and intense cramping, aside from normal postpartum cramping.  The following months included several visits with my doctors and more surgical procedures than I remember now.

My body hasn’t been the same for many reasons since the boys were born, even 19 months later.  Not much turned out the way I planned, but the boys are healthy and they are smart, rambunctious toddlers. I seem to be stable and certainly healthy enough to give the boys everything they need and more.

5 Tips to Deal with a Postpartum Complication

Alex Brink and her husband of 6.5 years live in the greater Pittsburgh area.  Alex is a Licensed Professional Counselor and Behavior Specialist. She is currently a stay-at-home-mom to her 19-month-old identical twin boys.  She has enjoyed exploring local parks and playgrounds with her family while watching the boys learn, play and explore.