Home » Twin Cribs: Our Best Advice For Your Setup 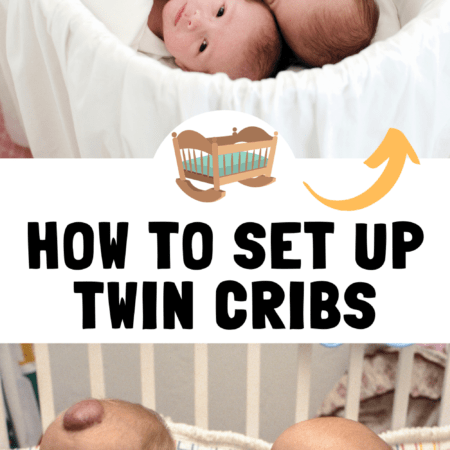 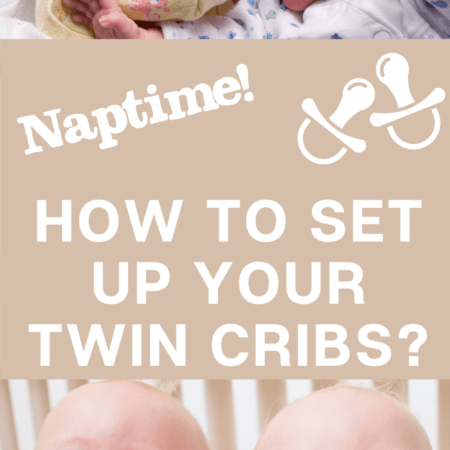 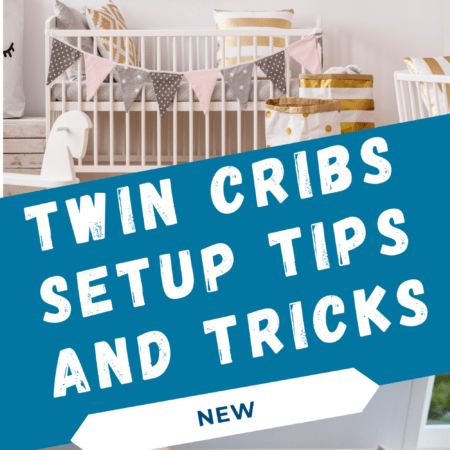 Are you expecting twins? Have you planned the sleeping arrangements yet? Get all your twin cribs questions answered before you plan your nursery.

When expecting twins, making room for “baby” is a whole different ball game. Squeezing two newborns into one nursery can seem daunting, especially when planning how many cribs and where to put them.

How do you know what nursery setup is right for you and your twins? Are there hard and fast rules when it comes to sleep for twins? To co-crib or not, to room-share or not. There’s always that extra layer of complications when planning for twins, isn’t there?

Do I need two cribs for twins?

One crib is usually fine in the beginning. Always check with your pediatrician and follow their advice. Having grown in the womb together, twins do have an awareness of each other and find it comforting, safe, and calming when next to each other. Twins were “wombmates”, so being roommates in the same crib seems like a logical next step.

If they sleep better when they know the other is close by, crib-sharing is a great idea, as long as each baby has enough space and is comfortable.

Is there a crib for twins?

Twin cribs, double bassinets, and pack n’ plays are available, although some are hard to get your hands on. Twin cribs (or twin baby cots) are popular in the UK but haven’t really gained popularity here in the States. If you happen to find a twin crib, you might have sticker shock, as most twin cribs are quite expensive. Pinterest is littered with photos of cribs double deep, double high (stacked on top of each other), and uniquely shaped to fit in a corner. However, the most popular and affordable double cribs for twins, are just that: two (as in double) cribs.

When designing a nursery for two, skip the large convertible cribs, and choose a simple crib or even a mini crib. Look for cribs with low, even sides. This will give you more placement options.

If a double crib is what you really want, you could push your mini cribs together widthwise to create the illusion of one crib for two babies.

Can twin babies sleep together?

There isn’t enough evidence to recommend or discourage twins from sleeping together.  Due to this reason, the American Academy of Pediatrics recommends against it. If you’re the worrying type, separate your twins so you don’t lose any sleep over it.

Lots of parents choose to put their twins in the same crib, at least for the first few weeks. For some twins, having each other close by is comforting and soothing. Putting twins in the same crib can help them regulate their body temperatures and sleep cycles. Again, check with your pediatrician and always follow their advice.

After my twins were born, baby A was in the NICU and baby B was in my room with me. The nurses advised me to take baby B to see baby A and to place them in the same bassinet. I was told that just being near each other can create a soothing, healing effect. Less than 24 hours later, baby A was off oxygen and in our room, bunking with her brother. We continued co-sleeping until they were 3 months old. Even now, 4 years later, they love to push their twin beds together so they can sleep right next to each other.

If you put your twins in the same crib, follow the same safe sleeping advice as for a single baby.

Should twin cribs be next to each other?

It is just fine to place cribs side by side or end to end. In fact, this can comfort twins because they can still be relatively close to each other but still have their own space.

If finding room for two separate cribs wasn’t hard enough, you will need to follow some basic rules for crib placement. When placing two cribs next to each other, make sure the cribs are flush with no gap between them and no way to create a gap. If your cribs are not flush against each other and securely in place, then put at least 3 feet between them. Children can and do climb out of their own cribs into their siblings’ cribs. If cribs are just a few inches apart there is the possibility that the climbing child could fall between the cribs and become stuck.

The location of twin cribs inside the nursery is also very important. Never put a crib directly in front of a window. Your baby could easily overheat in the afternoon sun, or worse, fall through the window while attempting to climb out of the crib. Toddlers have also been known to strangle themselves with blind cords or pull heavy window treatments down by tugging at the fabric, so be sure to keep these items well out of reach.

At what age should twins stop sleeping together?

Many parents of multiples decide to sleep them together in the same crib for the first few weeks. As they get bigger and squirmier, they’ll need separate sleep spaces. As soon as any of your babies start to roll, move them into their own cribs to ensure that they will not roll onto their siblings and possibly restrict their airways.

If at any time your babies end up hitting each other due to their reflexive kicking and hand movements, or you feel the space is too small and confined, move your babies into separate cribs.

Have you taken an infant CPR course yet? A first aid course? A car seat safety course? A babyproofing course? Twiniversity has an all-in-one class — The Complete Baby Safety Course — to cover ALL those topics. Click here for details and while you’re at it, check out our Twiniversity Memberships to get better connected with other twin parents and the Twins Tale Podcast to hear hilarious and inspiring stories from twin parents.

When should twins sleep in their own room?

The American Academy of Pediatrics recommends keeping the babies’ sleep area in the same room where you sleep for the first 6 months or, ideally, for the first year. The AAP recommends room-sharing because it can decrease the risk of SIDS by as much as 50% and is much safer than bed-sharing. So, place the babies’ crib, bassinet, or pack and play in your bedroom, close to your bed. Plus, room sharing will make it easier for you to feed, comfort, and watch your babies.

How do you sleep with newborn twins?

Getting your twins to sleep successfully and at the same time, so you can get some much-needed sleep can be a challenge! New mothers are often advised to “sleep when the baby sleeps,” yet few (less for twins’ moms) can adequately do this. Here are some strategies for managing the unique sleep needs of parents raising twins:

Keeping a schedule is one of the most useful tools when you have multiple infants. Not only will it help with sleeping but also sanity.

How can I sleep with twins?

According to the American Academy of Pediatrics (AAP), you shouldn’t share the same bed with your twins because it increases the risk of SIDS. But the AAP does recommend that you room-share (having your twins sleep in your room, each in their own bassinet or crib) for the first six months and possibly up to a year. It can be tempting to pull one or both of your twins into bed with you in an attempt to get more sleep, but adult beds can put infants at risk for suffocation, strangulation, or entrapment. These dangers are even greater for babies who are born prematurely or at a low birth weight, as is often the case for twins.

How should you sleep when pregnant with twins?

Depending on how you normally sleep through the night, you might have to rethink your favorite position when you’re expecting. To prevent blocking blood flow to the baby, experts recommend sleeping on your left side during pregnancy. Not your favorite sleep position? Don’t worry. You won’t have to switch things up until you hit the second trimester. Before 12 weeks, you can sleep any way you want. As your pregnancy progresses, though, sleeping on your back and stomach can become uncomfortable.

The best way to sleep is on your side (left side preferably), especially in the third trimester. This position optimizes circulation for the babies and helps relieve lower back pain. That said, be sure your belly is supported while side-lying. If you happen to have a million extra pillows, you can use those to support yourself. Many people find it optimal to sleep on their side with one pillow under their knees or between their legs and another under the belly. Or, invest in a maternity pillow.

Setting up your twin cribs don’t have to be the most stressful part of planning a twin’s nursery or sleeping space. Every family is different and every home set up is different. Do what works best for you and ask your doctor if you have any newborn sleep questions.