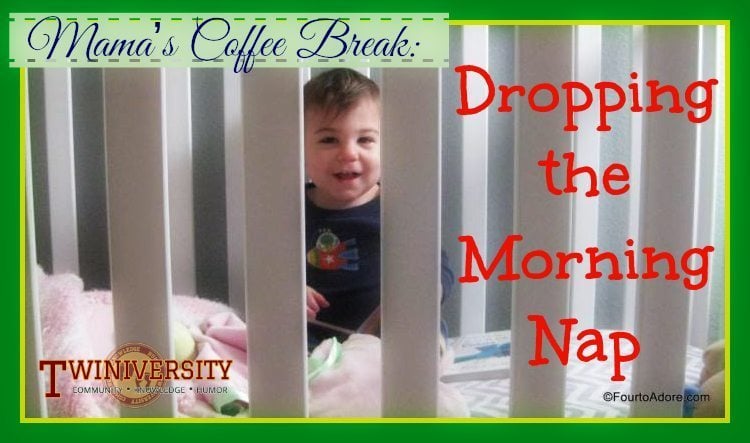 Once the babies became mobile, I attempted “Pack ‘n’ Play” time.  It is a Babywise concept that I’ve seen my cousins implement beautifully with their singletons for years.  In fact, Jennifer wrote a fantastic, easy to follow explanation of how to integrate it into a daily routine. With four babies, it became a challenge.  At first, I simply added a Pack ‘n’ Play to our morning “rotation”.  I put one baby in the Pack ‘n’ Play with novel toys, one in a Jumparoo, one in an Exersaucer, and the fourth enjoyed individual time with me.  Every 10-15 minutes, I rotated the babies to a new station so they all got to experience each activity.  It wasn’t exactly the same as I’d seen my cousins use Pack ‘n’ Play time, but it worked relatively well.  That was, until the quads learned to walk.  At that point, when one baby was in the Pack ‘n’ Play the others either whined to join them or the contained one wailed to escape.  I then nixed the notion of Pack ‘n’ Play time.  After all, the concept was to promote independent play while allowing mom a bit of time to accomplish other things.  That was not happening.  It became more of stress, and I hated keeping a giant Pack ‘n’ Play set up in our already cramped quarters.  About a month ago, I folded up our Pack ‘n’ Play and stuffed into the boys’ closet.

Ideally, Pack ‘n’ Play time would look like this, with each of the quads taking a turn with a puzzle or other interesting toy. I don’t know why I didn’t take “honest” pictures as well. You know, the ones with three screaming babies pressing their noses to the side of the Pack ‘n’ Play or one baby tossing the toys out and wailing. I just didn’t.

As 18 months approached, so did the dreaded morning nap drop.  Seriously, as our friends with same age multiples dropped this nap, I clung to it dearly.  Morning nap has never been long, but it is “me time”.  When the quads go down for morning nap, I make sure to take care of me.  It’s when I get dressed, brush my teeth, sip my coffee, catch up on emails, and perhaps tackle a few chores.  It does wonders for the rest of our day.  I feel better and have far more patience than when morning nap goes awry.  The time inevitably flies, but I savor every last second of it.

By 17.5 months, it was apparent that morning nap was headed out the door forever.  EEEKS!!!  Yet, the babies still seemed to need rest time as much as I needed the quick recharge.  Someone would request it saying “night night”, and another would curl up with a blankie on the floor.  Rest was still needed.  However, if I allowed them to continue with a 45-60 minute morning nap, then our afternoon was horrendous.  No one slept in the afternoon and everyone was cantankerous.  If we totally skipped morning nap, everyone was cranky and still didn’t nap well in the afternoon (even if afternoon nap was earlier).

Clearly, it was time to evolve.  Instead of going cold turkey on dropping morning nap, I instituted Quiet Time, which is my adapted version of Pack ‘n’ Play Time.   Rather than darkening the nurseries for nap, I left the windows open and lamps illuminated.  I also selected a novel toy (preferably a coveted one) and a few books for each crib, encouraging the quads to explore them.  At first, we had Quiet Time at ten sharp when morning nap would normally occur.  The quads generally played happily in their cribs for the first 10-15 minutes then drifted off to sleep.  It was nice, but still often interfered with afternoon nap.  Over a few weeks, I gradually moved Quiet Time back and afternoon nap a bit earlier.  We are still transitioning, but instead of dropping morning nap I believe we will integrate Quiet Time into our schedule for a long time.  At this point, Quiet Time is only 30 minutes long, and if they fall asleep it’s only a catnap that doesn’t impact the afternoon nap.  It is refreshing for all five of us.  The quads each get time with a preferred toy that cannot be snatched.  Plus, I have just a few moments to enjoy a warm cup of coffee.  I expect that as they get older, it will evolve to independent playtime in their rooms or another quiet place.  I believe we all need a little peace in our day!

Sydney was so tired, she sprawled out on her side as she continued to play.

To spice things up, I also let the quads chose a different crib. They seem to enjoy the new scenery and crib soothers. Also, since we are in the groove of this new routine, I offer them 2-3 choices as to what toys they want in their crib. It really helps when they feel some ownership over their time.

Do you have time to yourself each day?  If so, what do you chose to do?

It's Naptime! Nap Schedules from Parents of Multiples 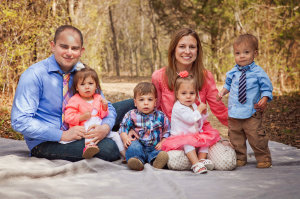 Amber Shawver began writing Four to Adore shortly after discovering she and her husband, George, were expecting quadruplets.  The blog began as a means to keep family and friends updated regarding a high risk pregnancy, but writing quickly became a passion for Amber.   She continues to share the journey raising girl, boy, girl, boy quadruplets (born in 2012) as it unfolds.  At Four to Adore, you’ll find heartwarming and humorous anecdotes from daily life with quads, DIY projects, tips for parenting multiples, product reviews, recipes, and kid approved activities.  Don’t forget to check out Four to Adore’s Index for a comprehensive list of helpful posts dating back to tips for managing a high risk pregnancy and caring for multiple infants, to name a few.  In an effort to maintain professional skills and a stitch of sanity, Amber continues to practice school psychology in an urban school district part time.  She finds that her professional training and experience, namely in behaviorism, is often handy in raising her brood.  If you can’t get enough, you’ll also find Four to Adore on Facebook, Twitter, and Pinterest!