Home » Should I Bring Car Seats on an Airplane? 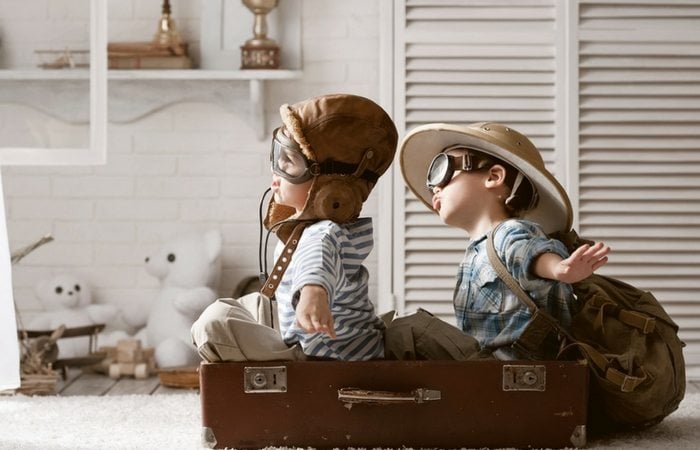 “What are other parent’s opinions on taking car seats on an airplane? My twins are 2.5 years old and we will be in a plane for about 8 hours.”

– We flew when my girls were that same age with car seats and I was so glad we did. They were used to them and comfortable. They were safe and secure and I think we were all a little more relaxed because they were in them. It was absolutely worth the little extra hassle. ∼ ADW 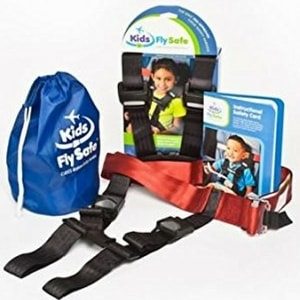 – I used the CARES harnesses and the Fly Legs Up footrest system to fly from New York to London when my twins were 2.5. It worked well for us and everything was much more transportable than the car seats on the airplane.          ∼ KMC

– We are taking a short flight and will need our car seats, but not a stroller once we arrive. So we’re wearing the babies through the airport and wheeling their car seats on folding luggage carts. We know they nap well in their car seats and then they’re touching fewer airplane surfaces and germs. I don’t know if it’ll work, but I guess I’ll find out!  ∼ JHA

– My boys are wild (2 this month), so I could NEVER imagine trying to do a flight without car seats. It would literally be hours of trying to keep them sitting. ∼ LC

– I didn’t know you could, I took my then 14 month old on a 9 hour flight. She was pretty good and had a seat of her own, but knowing this I’d probably bring my twins car seats on an airplane. They’re 4, but fidgety. ∼ HLEW

– Do it! I’ve flown internationally with 3 kids in car seats on 14 hour flights, as well as shorter 1.5 hour flights. No matter the length of the flight, being able to secure your child in a car seat is life saver for your sanity and for them. Turbulence is real. ∼ MJ

– I took my twins on a 16 hour flight with no car seats. I think giving them that freedom was a little more easier. They didn’t feel so strained. ∼ KD

– I would to bring the car seats. It may be a pain in the butt, but if there’s a problem on the plane, God forbid, you can strap them in the car seats vs having to hold them tight. ∼ RK

– We gate checked the car seats on the airplane in rollable bags and used the CARES harness on the flight. We also used Pockit lightweight strollers, because they fit under the seat in front of each kid when folded. Worked brilliantly. Wouldn’t do it any other way again. ∼ JW

– At 2 you have to pay for their own seats anyway, so I would bring them. I did it for my 2 year old singleton and it was so worth it to be able to lock them in for take off and landing (Yes, lots of stuff to haul). Most airlines let you check strollers at the gate without a charge. Southwest did it for us so I recommend them! Definitely take the seats. Your children are used to traveling in them and will be less likely to want to get up and move around. They will be safer as well. In addition, you will need them at your destination and it is not recommended to check car seats.          ∼ HLS

– Just to consider. If you take them along they are often only allowed in the window seats. Meaning you might be separated by row or opposite the aisles window. It’s a safety issue when leaving the plane in an emergency, they can’t be in the way. We did fly once, it was a 24 hour trip overseas with our first. She was fine some of the time, but not all the time. She was 1.5 years old at the time. We are going again with 2.5 year old twins and older sibling and not taking the car seats on the plane. It was definitely a hassle to carry around 1 seat, as well as all the luggage and changing airplanes 2 times. We know that won’t be possible for us with 3 kids and only the two of us. ∼ NE

– I’ve done international flights and have never taken car seats. Too much of a hassle for us. ∼ EB

– Car seats on an airplane are not necessary. I traveled overseas (30 hours!) several times with my older girls (before the twins were born) and never took car seats. Bring more entertainment (little presents individually wrapped, give a new one every couple hours) and snacks and you’ll be fine. ∼ GB 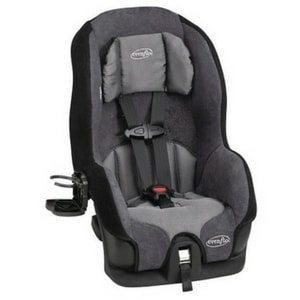 – I have flown quite a bit with my twins and although lugging the car seats on and off the plane can be a bother, it is worth it. The car seats we use at home are really heavy Britax ones, so we bought some lighter weight Evenflo Tribute LX for travel. They fit nicely into rental cars and are much easier to fly with. There is slightly less padding, but the safety checks out and it has been a worthwhile investment for us. You can usually get pre-boarding to fit the car seats in, and once on the flight, you don’t have to worry about them unbuckling themselves and sliding out of the seat for 8 hours! ∼ CC

– We traveled overseas when our twins were 2 and we checked our cars seats when we checked in. The kids sat well in the seat and it was nice to have the extra room for a nap, cuddle or to change their pull-up (the bathrooms were too small for that). Once we arrived, it was so nice to have a seat we trusted to drive around Spain while we were there. Make sure to put the child’s name and address on the seats at the back and the airline provided bags for them to be put in. ∼ KL

– I would totally take car seats on an airplane! ∼ BK

– No, you don’t need the burden of carrying car seats on the airplane. They will be fine in the plane seats and will fall asleep for some of the time anyway. There is the in flight tv console and whatever toys you take with you to entertain them. Safe trip. ∼ NG

– Its a huge pain to take car seats on the airplane. We took my 2.5 year old’s car seat on 6 hour flight and he didnt want to be in it. So we held him while he slept and the extra seat was useless with his car seat in it. Also, at random times the light can go on for seat belts if the turbulence is bad and we would have to wake him and put him in it. Much easier to just buckle him in the seat while he’s still asleep. ∼ DB

– We used the CARES harnesses. Check with the airline. We flew overseas and we were told the big car seats were not allowed. ∼ CCF 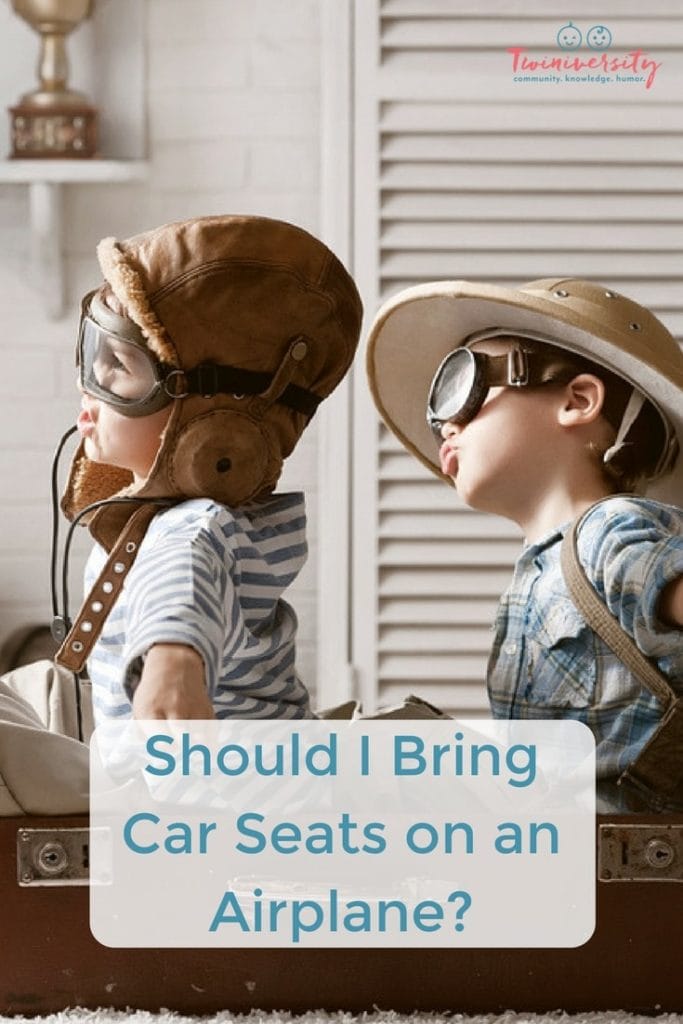 – I would rent the car seats at your destination, it’s one less thing to stress and worry about. Any 2.5 year old will want to get up, walk the aisles and move around when the seatbelt sign is off. I know my daughter wouldn’t like to be that confined in a car seat on the airplane. ∼ GD

11 Must Have Supplies For a Road With Twins