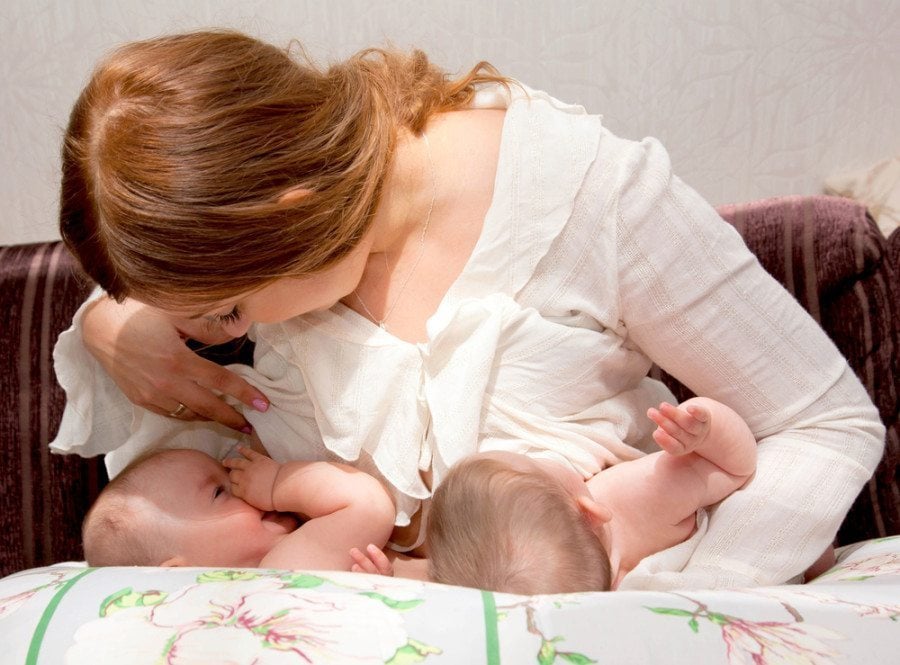 A mom of twins recently asked: “Do you have any suggestions on tandem breastfeeding? My girls are a month old and I’ve tried nursing with the double pillow a couple of times but it seems so awkward and hard to support their heads and latch at the same time!”

Here’s what our Twiniversity fans had to say!

– My Brest Friend twin nursing pillow. It helps so much and then I slid another pillow under their heads just so I didn’t have to hold them there so much. The Brest friend pillow gives their bodies enough room to lay supported on each side of you. I nursed my boy/boy twins for two years. Good luck, fellow twin momma! Hope it helps!

– I used the Twin Z pillow, but I hated tandem nursing in the beginning, it was uncomfortable for me and the girls didn’t really like it either. At around 6 months it got easier, now at 14 months it’s the only way they like to nurse. Hang in there mama!

– I’ve been tandem breastfeeding my twins since they were a week old using the Twin Z pillow. I love the back support, especially when nursing in bed.

– I didn’t have much luck tandem nursing on my own until they were about 6 weeks old and not so bobble-headed. Up until then I would practice with my husband’s help. He would sit behind me on the bed and be my extra set of hands!

– I never mastered tandem nursing – but you cannot tandem nurse until they can latch on themselves – holding their head themselves is vital as well.

– Pillows, lots of pillows. I tried, I failed, had EVERY pillow in the house, tried a nursing pillow – EPIC FAIL. Propped up in bed (with LOTS of pillows) was my best successful attempt.

– I tandem nursed because it was easier for me. They always wanted to eat at the exact same time. I used the My Brest Friend pillow. I think in the very beginning I put a pillow underneath the pillow so I wouldn’t have to lean down while they latched. It brought them closer to me. Then eventually I didn’t need it. They found their way without me helping. Good luck!

– I never mastered it either! I would breastfeed one baby and hold a bottle for the other baby, then switch at next feeding. I figured at least they got breast milk on half the feedings, better than nothing.

– It is hard but eventually worked for me. Get your mom or someone to help at first. It’s hard to do alone at first when they are so tiny. Hang in there! Hugs to you!

– I gave up on that. We did it a few times but since I had to use a nipple shield at first it was causing me to stress out. We only tandem fed in bed now and I definitely prefer it that way.

– I wasn’t really able to tandem nurse until they could hold on by themselves. And by that I mean latching, holding their heads up, and grabbing ahold of me. I just kind of kept them from rolling to their back. A nursing pillow never worked for me. I just sat cross legged and their upper backs rested on my thighs.

– Laying flat on my back and having them lay on top of me was easiest at that age but most times it was one at a time. 3 months is a game changer.

– I used receiving blanket folded for under their heads!!!

– The biggest advice I have is to get advice from a Lactation Consultant. I couldn’t have tandem nursed without their advice and it helped me stay calm throughout 16 months of nursing. We had a My Brest Friend twin pillow, which was my favorite out of the three nursing pillows I’ve owned through nursing 4 kiddos. We were able to tandem nurse right away. I did the occasional one on one, to have alone time with both, but for the sake of time and sanity tandem was best for us. Good luck.

Worried about breastfeeding twins? What To Do When You’re Breastfeeding Two is an on-demand online breastfeeding twins class made just for YOU! This course was created by Twiniversity in partnership with Judy Teibloom-Mishkin, IBCLC. Click here to learn more… and while you’re at it, check out our virtual lactation consulting and virtual twin parent coaching services.

– I used the My Brest Friend twin pillow. I would have to use muslins stuffed down their backs to keep them in place for the first few weeks. It took some practice but it’s possible. Sometimes I would also have to let one baby nurse for several minutes until they were settled properly before attempting to latch the other one. When they got bigger I had to stuff cushions under the sides of the pillow to prop it up. I only got used to having both babies in the football hold but there are several holds for tandem nursing.

– I used the My Brest Friend nursing pillow. I had trouble tandem nursing at the beginning because they had difficulty latching so I nursed them on their own until they were stronger. It was a huge time commitment but well worth it!! Hang in there!

– I tandem fed for 9 months with my twins! We used the My Brest Friend twin pillow. I would put them on the pillow with pillows on either side of me. In the very beginning I’d adjust the pillow or how I was sitting to rest on my belly since it was was still there (who am I kidding it’s still there to a degree 2 years later). The two pillows on either side next to me helped keep things level so I could latch one then latch the other. We did a football hold. It’s the only one that worked. Good luck mama You’ll find your groove!

– I used a regular Boppy pillow and was able to tandem nurse for a while, they required too much food for me to keep up by 3 months so we went to the bottle and fed them breast milk.

– I tandem nurse with the Twins Z pillow using the football hold. I rolled up blankets to prop up the pillow a bit and use a stool for my feet. Seemed to work and had great back support. Good luck.

– I nursed my boys for a year using lots of pillows, I have a V shaped pillow to support their heads and then made a good pile around them to support them so all I had to do was help them latch and keep them in a good position once we were off. Good back support is essential too to prevent neck and back ache. Keep going it will get easier.

– Honestly I had trouble since one of my twins couldn’t latch. A visit with a lactation consultant to your house can be helpful to give some tips on the best option.

– I used the My Brest Friend twin pillow but I still rolled up receiving blankets around them to help me prop them up a little more when they were small. I also used a few pillows behind my back to help me lean forward a little more. Now they are 14 months old and I just have to lean back a little and they lay on me and nurse, it’s the only way to really tandem feed as they’re bigger.

– Once they get old enough to support their heads and latch on their own, it gets a lot easier. Keep trying but don’t drive yourself mad with it.

– As a single mom, in order to get that last feed in and get out of the house for work, I put them both on the bed and lean in to feed them both. Certainly not flattering, but practical, AND efficient!

– When our twins were smaller I would fold a towel to put across the My Brest Friend pillow. It supported their heads a bit better plus caught the dribbles.

– I watched some YouTube videos of a mom who made it look so easy!

– I was never able to breastfeed them both at the same time. I was also not producing enough for them both so we had to supplement with formula as well. As far as breastfeeding them I did one at a time within 30 minutes of each other. I would wake one up then 30 minutes later wake the other. Good luck though, if you can manage both at once that’s awesome!

– The Twin Z pillow is amazing. I started using it when my twins were one month and suddenly tandem nursing was doable. Now my twins are seven months old and still tandem nursing with the Twin-Z. It was such a game changer.

– I used to have one nursing laying across my stomach with the other nursing with his head resting on his brother. Or the foot ball style.

– I tandem nursed my twins from birth. It seemed awkward so I Googled videos on how to position them and it was so much easier after I found the right combination of nursing pillow and a Boppy on either side to set them in when they were done!

– I used both the My Brest Friend and the Twin Z for different areas of the house. I rolled up receiving blankets to put under their heads, and that did the trick!

– Lots of supporting pillows, and my husband to help out with positioning. And, always keep a huge amount of water in reach.

– I used My Brest Friend for twins and did the football position. You can do it!