Home » The Nuts and Bolts of How I Exclusively Breastfed Twins 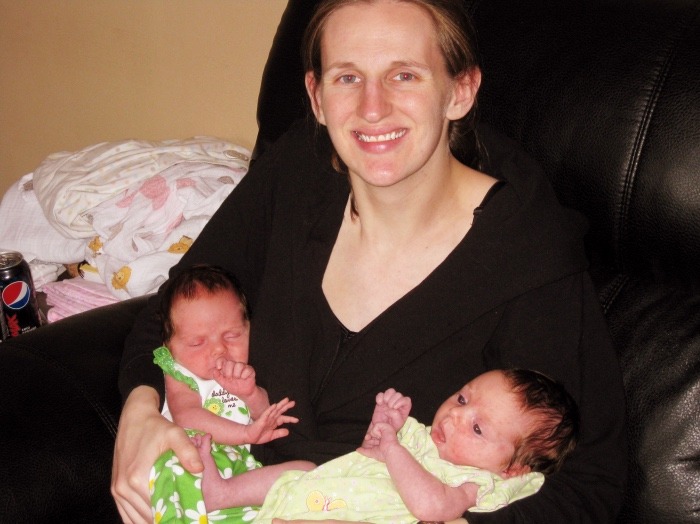 The Nuts and Bolts of How I Exclusively Breastfed Twins

Please know that I understand breastfeeding is a very personal decision, and I would never try to convince someone else to breastfeed. I also know that there are moms out there who desperately want to breastfeed but either medically or logistically are not able to do this.

I'm not sure my experience can really help them. But I also know there are future moms of twins who may want to breastfeed but are nervous or unsure if it's going to be possible, and maybe my story can encourage them. I exclusively breastfed twins, which is something that even now when they are age 7, I am pretty proud of.

First of all, I need to acknowledge that we (my babies and I) were all very lucky. I was able to carry my girls to a full-term pregnancy (38 weeks.) They were born through an uncomplicated Cesarean-section, and they were 6 pounds 15 ounces and 6 pounds 2 ounces at birth. They were born big enough and strong enough that they were prepared to breastfeed, and I wasn't stressing about them needing to gain any specific amount of weight. 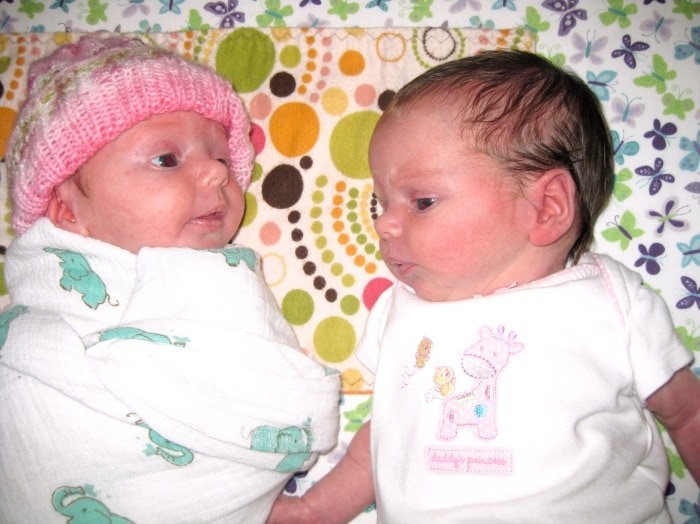 We were also very lucky to have my husband, who would have supported any decision that I made regarding their feeding, available to help. We had all of this going in our favor when we began trying to breastfeed.

As C-section babies, my twins and my husband left me shortly after their birth to receive their first baths and other medical procedures. I was left alone to recover for a very short while. Then my husband made his way back to me with two hungry baby girls, and we all made our way to a recovery room to begin to figure out this breastfeeding thing. These were our first children, so I had no experience in where to begin.

We had a very helpful lactation consultant meet with us right then and help us through our first session. I still feel incredibly grateful for this. It might seem obvious, but I really wouldn't have known how to start. She showed me how to use pillows to prop up these tiny new babies, and how to hold my breasts in a way that the girls could latch onto.

We had a somewhat successful first feeding, after which the girls went to sleep, and my husband and I had a few minutes to try to wrap our heads around the idea that our babies were finally here.

A lot of our first day at the hospital is a blur, but I remember struggling through several attempts at nursing, some of them successful and some of them much less so. We quickly realized that even though it was more difficult, it was much more practical to try to feed both girls together.  Otherwise, by the time one baby was finished nursing, it was time to start the next baby, and we never got a chance to rest.

The other thing we noticed is that our Baby B, who was also our smaller baby, was really struggling to feed. She would get tired out while trying and start to fall asleep, and then later she would wake up very upset, probably because she was still hungry.

One of the nurses who checked on us overnight kept asking if we wanted to use formula. I tried to ask if we could just have some help getting our baby to nurse, but she wasn't able to help us with this. We were able to request to meet with the lactation consultant again the next day, and we didn't use any formula, although I was willing to if the nurses thought that it was necessary.

Our second appointment with the lactation consultant was similar to the first, but we at least had the peace of mind that our babies both got a good feeding during that session, and we got more practice at feeding them together.

At some point during the second day in the hospital, I also noticed that our Baby B seemed to feed better if I could hold her upright instead of laying her down while she nursed. This made a world of difference. It was a little awkward to hold one baby lying down and the other baby upright, but we were able to do it.

At some point during our third day at the hospital, I felt like we were finally getting the hang of it. My milk hadn't come in yet, but the babies were feeding when they needed to, and we didn't have any other nurses thinking we needed to use formula. 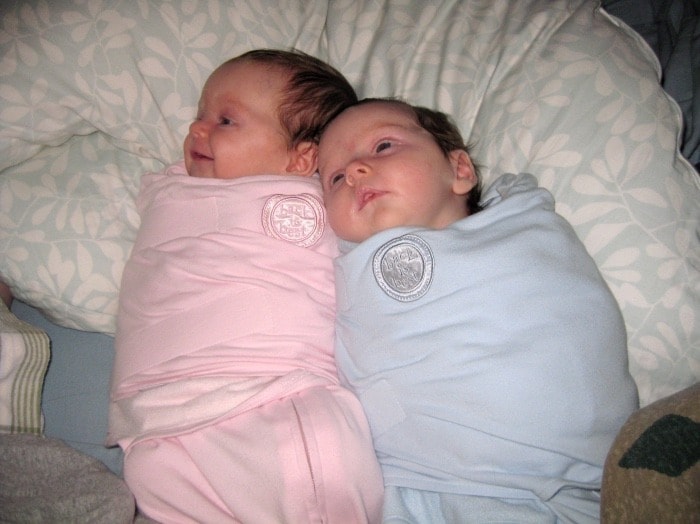 Our Routine at Home

In the early days, I nursed the babies on demand. If one baby woke up, my husband would change her diaper, wrap her in a blanket again, and bring her to me to start nursing.

We almost always woke up the other baby as well. He would unswaddle her, change her diaper (which would wake her up) and bring her to me to nurse. Typically the first baby to wake would finish first. My husband would burp her while I continued nursing the second baby. Then he would check her diaper, reswaddle her if needed, and lay her back in the crib.

When the second baby had finished, either he or I would check her diaper and lay her down as well. At first this process seemed to take forever, maybe up to an hour, but eventually, we had a very efficient system and could be finished with everything within 30 minutes after the first baby woke up.

During the day, the babies would nurse every two and a half to three hours. We eventually got onto an every three-hour nursing schedule, but it took about a month to develop that. At night, we started with two-and-a-half hour stretches and eventually the babies would sleep up to four hours at a time.

I also know that I am lucky because my supply usually kept up with the babies' demand. About one week after we got home from the hospital, our Baby A went through a growth spurt, and all she wanted to do that day was nurse. 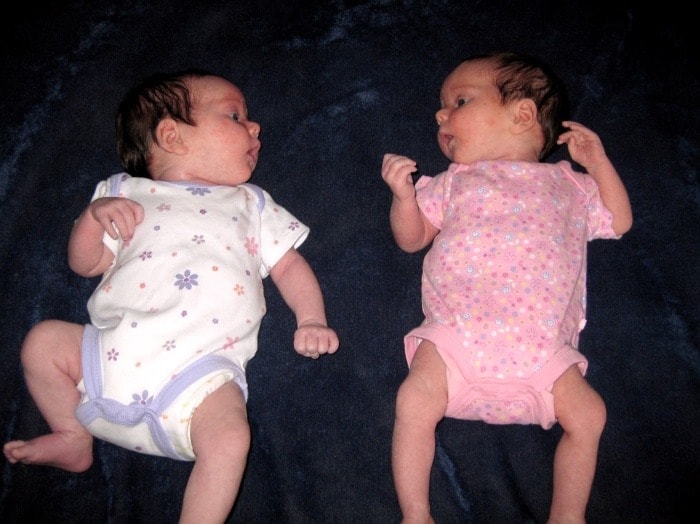 Generally, I would switch which baby was at which breast at each feeding. That day, Baby A was so hungry that I would also let her nurse from the other breast after Baby B had finished, in case there was any milk remaining. I remember worrying that Baby B might suddenly have an appetite increase as well, and I had no idea how I was going to handle that if she did.

Fortunately, we made it through the day, and my body was able to adjust. The next day Baby A was back to feeding more normally, and when baby B had an increase in appetite the day after that, I already seemed to be making more milk.

I never ate anything special or took any special supplements to try to increase my milk supply. I would make sure to eat when I was hungry, which was a LOT of food compared to what I normally ate, and I drank a lot of water. I made sure to have a large cup of ice water or a water bottle around all of the time because I was constantly thirsty, but those were my only “tricks” for helping my body to produce milk. Again, I recognize that I am lucky here because I know this isn't the case for every mother. 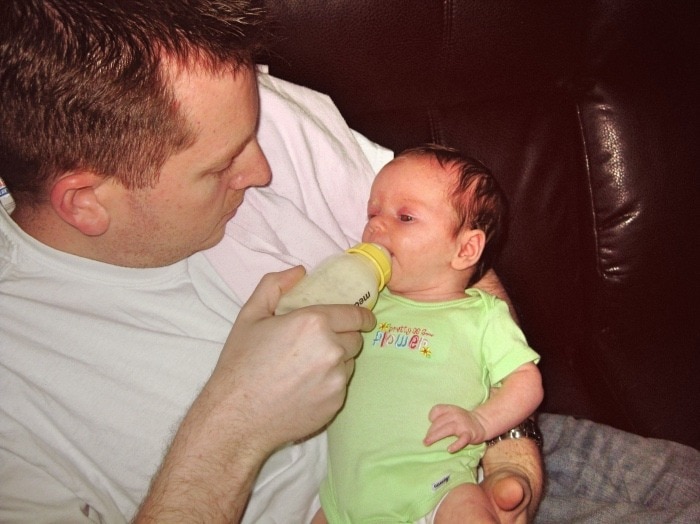 Preparing to Go Back to Work

Because I knew I would be going back to work when our girls turned five months old, I started pumping milk around the time the girls were one month old. We had read somewhere that around six weeks old is a good time to introduce babies to a bottle if they will eventually need to use one.

Right at six weeks, my husband gave each baby her first bottle using pumped breast milk during their 9:00 a.m. feeding. Both girls took to this right away without any problem. The next feeding they went right back to the breast with no complications there, either. Occasionally after that, if we had family members with us who were helping care for the girls, we would have them give the girls bottles of pumped milk. This allowed my husband and I to have the occasional meal together out of the house, and I was also able to attend a work training when the girls were two months old.

As it got closer to the time when I would return to work, I began trying to find one time during the day when I could pump milk to freeze it. This was a little tricky at first because the babies nursed very regularly every three hours, and then sometimes multiple times before going to sleep at night.

We eventually got to a point when the girls would go down to sleep at night, and generally sleep until around midnight. I started pumping around 9 p.m. before I would go to bed. Occasionally, one of the babies would wake up right after I finished pumping, and then I would end up giving her the milk I had just pumped, but this became rarer over time. I was usually able to freeze the milk from this pumping session, which helped me to build a supply before I started back at work.

I was also fortunate that during the babies' first year, I went back to work part-time. I only missed one feeding each day, the 9 a.m. feeding. I picked the girls up from their daycare provider around 11:30 a.m., and I had them home to nurse by 12:00. This meant I was able to maintain the milk supply for daycare by continuing to pump once at night before I went to sleep. I never had to try to work in more pumping, which helped make it feel manageable.

When I went back to work full-time, the girls were over one year old and were down to nursing twice a day: once in the morning when they woke up, and once at night before they went to sleep. I continued nursing them through 18 months old. Then we gradually worked cow's milk into their diet, and around 20 months, we stopped nursing.

When I first started learning about how to care for twins, I found so much information about formula, how to buy it, how to make it, and how to keep up with washing all of the bottles. I am so thankful I never had to worry about this. Learning to breastfeed was a process, but it was ultimately successful, and I felt happy knowing I was doing something that has so many benefits for the babies.

If you are unable to or are just not interested in breastfeeding your twins, that's totally OK. But if you are wondering if it's possible to exclusively breastfeed twins, I want to assure you that it is, and it doesn't have to completely take over your life. 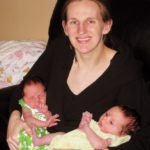 Ica Rewitz is a high school English teacher in Washington State.  She is married to a high school science teacher, and they have twin girls who are currently seven years old. When she isn't mothering and teaching, Ica enjoys hiking in the mountains, reading books, and writing for her blog Twins Happen at  twinshappen.wordpress.com.

5 Tips to Get Ready for Breastfeeding Twins

I Couldn't Breastfeed My Twins 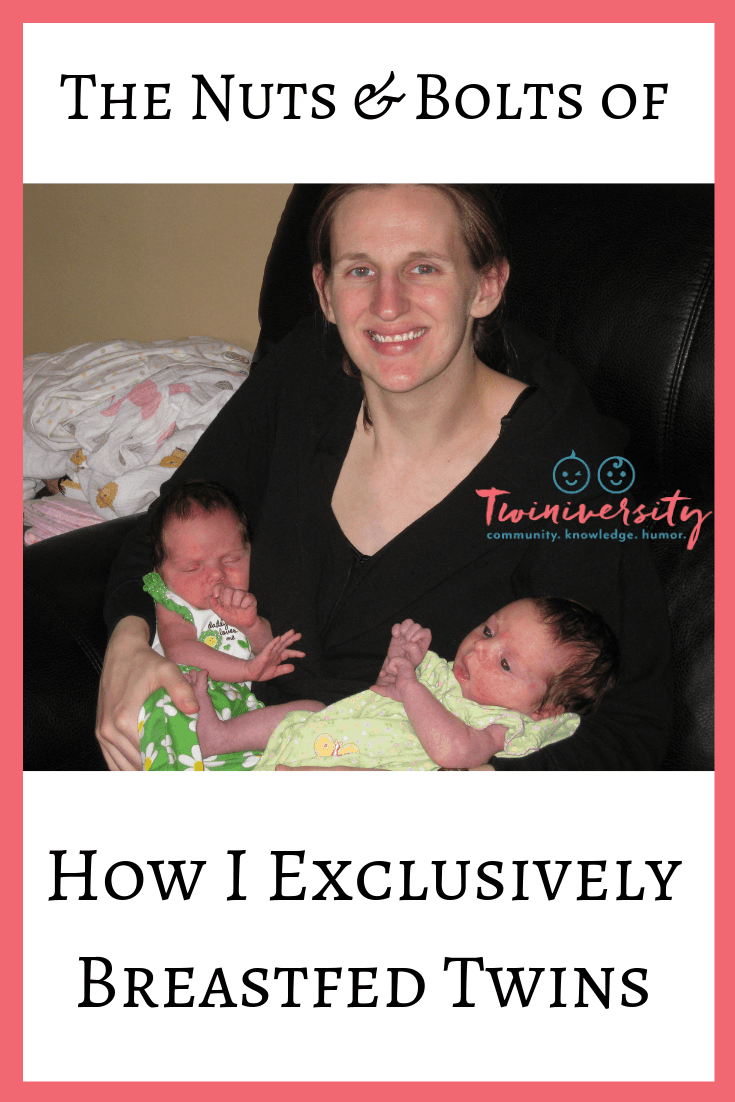