Home » Mirror Twins: All You Need to Know 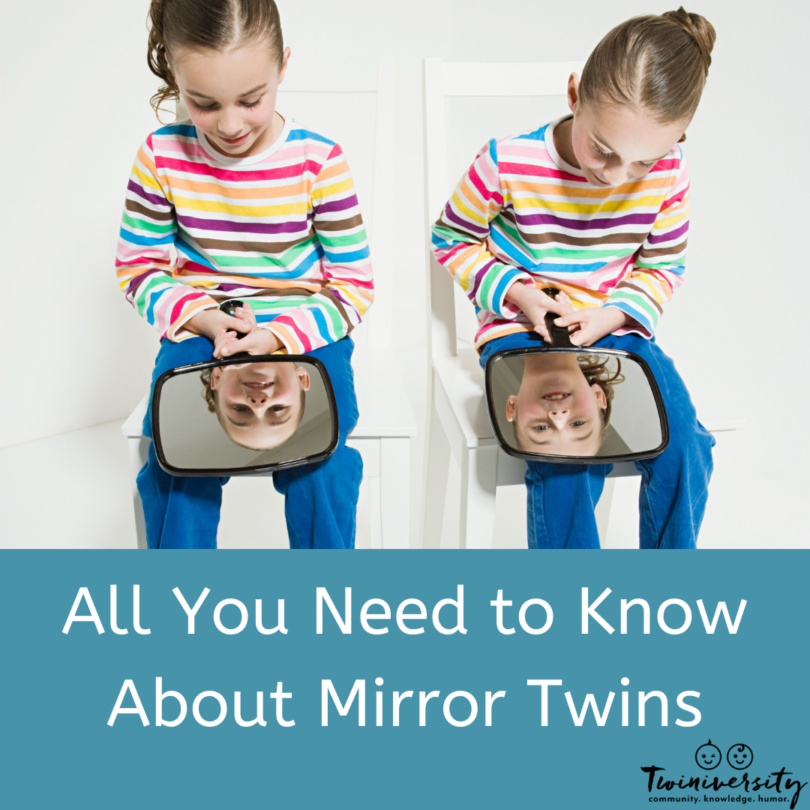 Have you ever looked at a set of identical twins and were able to tell right away who was who? Maybe one has a freckle on their right cheek while the other has one on the left? Perhaps their hair parts are on opposite sides? You may have encountered mirror image twins! Here’s all you need to know about this fascinating phenomenon and how to find out if your twins are mirror twins!

In order to understand mirror twins, one must understand how twins form. The zygosity (genetic relationship) of twins depends on what happens upon fertilization. We all know the details of that part so let’s focus on the science. There are two main types of twins:

An ultrasound can determine which type of twins you are having but with same sex twins the only way to know with 100% certainty is a DNA test.

The timing of the split impacts a few things in a twin pregnancy, including whether the twins are monoamniotic, diamniotic, or conjoined. For monozygotic twins, the two newly formed embryos are always genetically identical. After the split they each will develop their own physical and neurological traits. Differences can be based on when the split occurred and what happens after this split, during their growth in the womb.

What are mirror twins?

Mirror twins are a sub-type of identical twins. Occurring in 25% of identical twins, it happens when one twin carries anatomical features, physical characteristics, and even sometimes personality traits that are the opposite of the other twin.

Studies suggest that mirror image twins may occur when the egg splits later in development, typically 9–12 days after conception. When the split occurs this late, the genes that determine the left and right sides of the embryo are already active. Each twin takes one side, resulting in a mirror imaging effect. The twins are still identical but some of their features present opposite of one another. Only identical twins can be mirror twins, though not all identical twins are mirror twins.

Mirror image twinning can appear in a few different ways. It’s mostly in those little ways that make our bodies unique from each other. Though genetically identical, even identical twins are never exact carbon copies of each other. Physical differences always exist, but mirror twins are special in that their differences literally mirror each other.

In order to identify mirror image twins, families can look for physical features on opposing sides of the body of each twin. These anatomical differences can include:

Interestingly, not all of these opposing features will be identical themselves! Birthmarks may not be the same size or shape, but a similar mark with reverse placement on each twin may mean mirror image twinning. The shape of the eyes, ears, and nose may also be opposite. It may even make it slightly easier to tell your identical twins apart! Bonus!

For many, the first sign of mirror twinning is the direction of the whorl of hair on top of their babies’ heads. Later in life, this might look like cowlicks cropping up or natural parts falling on opposite sides of their heads.

How else are mirror image twins different?

Some studies suggest that mirror twins may even hold opposite personality traits. Psychological mirroring can affect everything from their social-emotional development and temperament to career interests, and possibly even sexual orientation. And then there’s medical mirroring which may even affect blood pressure and sleep patterns!

There is one physical feature that mirror twinning does not completely affect – fingerprints! Identical twins share DNA and blood type, but it’s our movements in the womb that create our fingerprints. As such, even identical twins do not have the same ones. That said, mirror twins can have similar prints in opposing patterns!

How do you diagnose mirror twins?

With the number of twins being born increasing every year, it is likely you may encounter or have a set of mirror twins yourself. Research suggests that 1 in 4 sets of identical twins are mirror image twins. That said, mirror image twinning is not an official medical diagnosis and as such, there is no test to identify the phenomenon. A DNA test can only determine whether or not your twins are identical.

The only way to determine if your twins are mirror twins is by giving them a good look over or having them look in a mirror together. Twin parents, take note of any physical features that are similar but opposite on their bodies. Start with the most obvious: moles, hair whorls and birthmarks. From there, you can observe and note any further differences such as handedness and personality differences.

Are there any complications for these twins?

Most of the time, mirror twins are perfectly healthy, just with an extra cool twin side effect. That said, complications can occur.

Situs Inversus is a rare condition that causes the major internal organs of one twin to develop on the opposite side of their body. This condition is typically not a problem unless they require surgery, at which point physicians will use diagnostic imaging to determine the exact location of their organs.

There are also some less serious medical conditions that appear to have a higher chance of occurrence with mirror image twins, including:

Aside from these uncommon complications, mirror image twins are no more at risk for issues than any other set of twins. Although they might have a harder time fooling their teachers with the old identical twin switcheroo!

Do your twins mirror each other?

Have you ever suspected that your identical twinnies might be mirror twins? Maybe you’ve noticed that one of your twins has a mole on their right hip and the other on their left? Now that you know what to look for, get in front of a mirror and look for other similar but opposite traits! You may just have a set of mirror image twins!

Maigen Beaulieu is a Child-Care Provider and freelance writer living in Upstate New York with her husband, 7-year-old identical twin girls, one lazy cat (Willow), and one wild Yorkie (Ella). As a way to cope with anxiety during her twin pregnancy, she began blogging about her journey and discovered a love of writing for, and connecting with, other parents of multiples. While her blog was put to rest years ago (hello, working mom of toddler twins with zero time to write), Maigen is thrilled to join Twiniversity and help other families navigate the journey of parenting multiples. When she isn’t writing about the magic and madness of twins, she can be found reading historical fiction, researching her family history as an amateur genealogist, or sewing cute jackets for her dog. She can be reached on Instagram and Facebook.