Home » Should My Twins Have Separate Bedrooms? 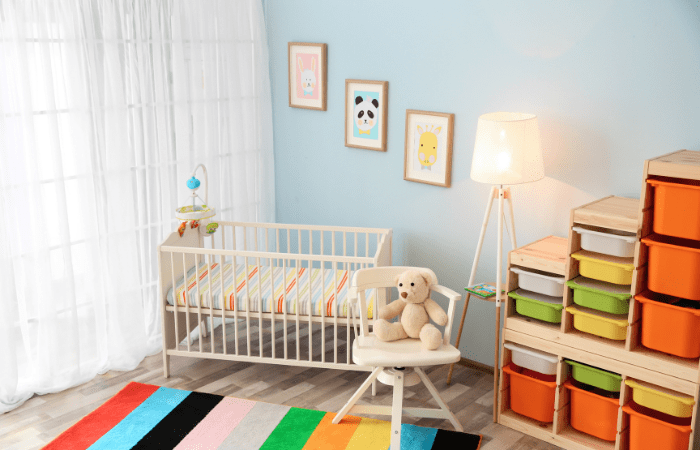 We are looking to move into a bigger house and have found one that my identical boys can each have their own bedroom. They are currently 4 months old. Has anyone put their twins in separate bedrooms as babies? Or do we wait until they are older and let them pick to either share or be separate? Or would it be too much trouble going room-to-room to care for them?

– We split our boy/girl twins up at 6 months. They had different sleep patterns and were waking each other up multiple times a night. Once separated everyone got a lot more sleep. ∼ RQ

– Our boys have been in the same room since they were born. They turn 4 today and are still sharing a room, sometimes they still crawl into each others bed. We have an extra bedroom if they decide they don’t want to share a room anymore. I’m going to let them make that call. Our boys have been on the same schedules since they were born so its been easy keeping them together. ∼ MFV

– We tried to put our twins in separate bedrooms, but we noticed they slept better when they were together. Once they were old enough to walk and climb, they always ended up getting into each other’s toddler beds. They are now almost three. We decided not to fight it. We bought them a queen size bed and they are totally happy together. ∼ AB

– My boy/girl 6 year old twins still share a room because they want to. However, they each have a bed tent for privacy. ∼ AL

– Our babies had the same room when they were first born. When they were 3 we moved and they got their own room. However, they always end up sleeping together. ∼ SSB

– We kept ours together and they never woke each other up crazy enough. One would be screaming and the other slept right threw it. We have recently separated them though, temporarily, while they transition to beds. They are 2.5 yrs old. They were getting out of bed too much and playing together. ∼ SO

– We let our boys decide. They were 8 years old when they got their own rooms and then would have “sleepovers”.    ∼ MRH

– We split ours up at 13 months and my only regret is not doing it much sooner! It has been such a lifesaver. It made everything way simpler and easier. ∼ EJ

– I think it depends on how they sleep. If one wakes up frequently and makes the other twin grumpy, separate bedrooms might work better. If they sleep well together, keep them in the same room and make the other room a spare until they’re older, if they want to separate then. ∼ MTW

– If you have the extra room I would have them sleep together and keep the other room as the playroom. Put nothing but beds in the sleeping room. I know it seems far away but you will thank me next year when they go to toddler beds. Once they transition from cribs to beds you may have to take all the stuff out of the room or never sleep again. Might as well set it up as a sleep only area now and establish some good sleep habits. ∼ TS

How To Get Kids To Sleep When Moved Out of Cribs

– That sounds exhausting to be going room to room. ∼ LM

– My twins have always been in the same room. Honestly, the thought has never crossed my mind to put them in separate bedrooms. Try both ways and see what works best for them. You’ll get it figured out. ∼ RC

– My identical girls are 19 year old and have always shared a room. In high school, they texted each other from the upper/lower bunk bed. Don’t worry about separating them. ∼ SSP

– We had an extra bedroom and used it to nap our boy/girl twins separately starting around 10 months. They still slept in the same room at night until they were about 2, at which point my son ASKED to sleep overnight in his own “nap” room. His sister wasn’t a great sleeper and still had night wakings at that point, which obviously annoyed him! It has always worked out well for us.  ∼ SW

– Don’t sweat it, mine are 7 years old and sleep in the same bed because they want to, even though we have two beds for them. Make sure you anchor ALL furniture to the wall, they will climb EVERYTHING. ∼ JH

– We split ours when they were about 5 months. One could have slept all night and the other wasn’t buying it. At about 18 months we put them back together and it is so fun. They chatter and put each other to sleep. They are about 2.5 years old now and they love sharing a room. I actually catch them in the same bed quite often. It worked for us.  ∼ ST

– I don’t know how you keep babies in the same room without them waking each other up. I keep one in a pack n play in our room and the other in crib in their nursery with sound machines in both rooms. Everyone sleeps much better that way in our home. ∼ YPG

– Depends on your needs. Our boys are 3 years old. They like being together and are on same schedule. For me it would have been hard if they had separate bedrooms. Keeping them on the same schedule is very helpful. I don’t forsee separating them until maybe the teen years. ∼ RMW

– Once we moved our identical boys into separate cribs, they slept fine in the same room, even if one was sick and fussy. Around 4 years old, they would spend way too much time playing at night, so we moved into a house where they could have their own rooms. For the most part, they appreciate having their own space. They will occasionally sleep together in one room on the weekends. ∼ EMS

– I separated mine that young. It helped them sleep better. Do it! If they want to share later, they’ll tell you and you can use the extra room for something else. ∼ HS

– Personally, we’ve decided to keep them in the same room until they ask to have separate bedrooms. But I see both the pros and cons of splitting them up. ∼ KG

– We started with a bedroom together and a playroom. At 10 they requested their own separate bedrooms. It was really nice having one room for all the toys. ∼ HPE

– We never had the room for the girls to have their own room but at 11 they sleep in one full sized bed (They have full size over full size bunks). ∼ TJ

– Mine are 6 and still share a room. Every night they talk about their day and unwind. It’s great bonding time. ∼ KSA