Home » I Had a Normal Twin Pregnancy and Delivery 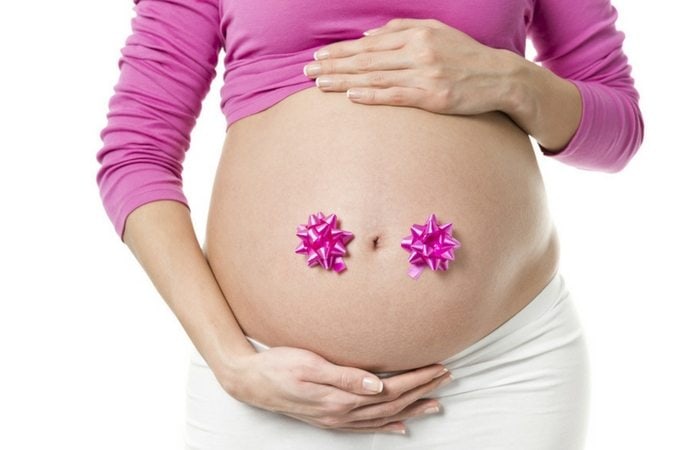 When it came to my twin pregnancy, I was blissfully unaware of how bad it could’ve been. After it was discovered that I would be delivering mono/di twins, I wasn’t nervous. As long as the doctors kept telling me everything was looking good, I was a happy mama-to-be. Luckily, after a complication-free pregnancy, I delivered 13 pounds of identical twins at the 38-week 4-day mark. Despite all the scary stories and statistics, twin moms need to know that a normal twin pregnancy is totally possible. Here’s my story of our uneventful and normal twin pregnancy and delivery.

I fared through the first 11 weeks of my pregnancy pretty well. Of course, I had no clue that I was carrying twins yet! It was hard to tell whether the queasiness was morning sickness or nerves, but most of my day-to-day activities were not hindered. I was still working and finishing my internship at a state historic site. I scheduled my first OB appointment for a Monday in early August with the same doctor who delivered me 23 and a half years earlier. He might not have remembered me exactly, but he certainly enjoyed the little joke he got to play on my mother.

After the ultrasound and clearly seeing two healthy heartbeats, my doctor gave me very little time to adjust to the news before requesting a nurse ‘get grandma’ to show her. Although my mom was admittedly rusty at viewing an ultrasound, she picked up pretty quickly to the doctor’s exciting news. It still didn’t stop her from shouting “TWINS!?!”And that was the end of the first trimester of my first pregnancy, a twin pregnancy.

It was a month later, at that same doctor’s office, that I received, without a doubt, the scariest news of my pregnancy. Another peek at the babies revealed no sure sign that they were in separate amniotic sacs. I saw a high-risk doctor almost immediately, with less than 24 hours between appointments. That night, I ran every “what if” in my head and looked up more scary statistics than I ever had before.

However, by the end of the high-risk appointment, all was well. My babies positioning (one atop the other) was putting pressure on the very thin membrane that separated their amniotic sacs. This was making it practically invisible. Aside from that, everything looked great and I found out I was having mono-di identical twins, which have one placenta and two amniotic sacs.

The next 15 weeks went by in a bit of a blur. I had Monthly visits with both the delivering doctor and the high-risk doctor. Almost every visit was routine and I could answer all the questions before they even asked. I was feeling fine, with no concerns. My babies kicked like crazy all the time. I appreciated the “normalcy” of these low-drama visits.

Third Trimester of a Normal Twin Pregnancy: Nesting and Overeating

One thing I did not enjoy was how I had started to feel a bit like a freak show. Friends and strangers alike asking what we’ve all come to know as “annoying twin questions.” My sonogram pictures came in handy as almost no one believed I was carrying twins. I felt strong and healthy; very proud of my body for taking care of these babies so well. I managed to avoid early bed rest and spent my time enjoying the last ten weeks of my pregnancy.

It was as soon as I had slowed down that some of the late-stage pregnancy symptoms occurred, like nesting and having to eat more frequently. I was feeling great and loved the newfound flexibility, although certain foods gave me heartburn like none other. I hoped that meant they would have a lot of hair.

It wasn’t until my birthday and the end of January that I hit the second speed bump in my pregnancy. I’d had a totally normal twin pregnancy up until this point, but this hiccup had everyone very nervous, aside from myself. I enjoyed my birthday dinner a little too much and spent the whole night sick to my stomach. I was unable to keep even water or an antacid down. At around 5 a.m., we contacted my doctor who said to meet him at the hospital.

I recall the nurses arguing over how many monitors to put on my belly. My doctor came in dressed in scrubs. I was sure it was just too much food but his main concern was my liver. When he found out that the babies and I were in no danger and exactly how much I had eaten the night before, I received a stern lecture. Looking back, I think we had him a bit rattled. The babies and I had, once again, dodged a major health crisis. I went home after a few hours of observation with orders of a bland diet and rest.

At my 38-week mark in early February, I marched into my weekly high-risk appointment ready to head to the hospital. When the high-risk doctor called the delivering doctor, he was very blunt. He said, “I’ve got 13 pounds of twins here, what do you want me to do with them?”. I very grudgingly went home with no answers but got a phone call later that afternoon.

Thursday morning was set for us to finally meet our girls. That gave me three days to finish preparing for twins. I remember feeling like I would never be prepared enough for the instantaneous roller coaster that is twin motherhood. I was too nervous to sleep the night before. Then, I was painfully early for my 5:30 a.m. check-in Thursday morning. As far as I knew, the girls were healthy but I was nervous about having a c-section.

RELATED: A Broken Down Delivery Day

My delivering doctors, a father/daughter duo, were talking about future travel plans and what movies they had seen. I took that as a good sign. Every once in a while they would tell me what stage of the procedure they were at. Overall, it was pretty quiet until they announced the first baby was ready for delivery. I remember holding my breath until I heard her big cry and saw their pediatrician come through the door. 47 seconds later her sister was born; her cry was softer than her sisters, but strong.

Then it was a rush of nurses yelling out numbers; APGAR scores and weights. The high-risk doctor was spot on, the girls together weighed 13 pounds, both 19 inches long. As is protocol in that hospital they were taken into the NICU for the traditional check-up, blood work, and cleaning. That was all the time they spend in the NICU. By the time I was in my room, Eva was waiting for me. I spent my two-hour recovery bonding with my girls. Eva with one bow ‘glued’ to her head and Ruthie with two. All three of us continued to do well and we went home after three days in the hospital.

Even now, five and a half years later, my girls continue to thrive. Eva is still my mover and shaker. Ruthie is still stubborn. Physically, my girls are the true definition of identical. They are never more than a fourth of an inch apart in height or a few pounds difference in weight. They beat the statistics and I still can’t believe I had a complication-free and normal twin pregnancy.

Gratitude for a Normal Twin Pregnancy

I count my lucky stars that I was blessed with my girls. However confusing and frustrating raising identical twins might be, it’s worth it. Among other things, they have taught me to never take anything for granted. Their story could have gone very differently and I’ve never forgotten that. A normal twin pregnancy is totally possible and I am grateful every day that we had one.

Leah Bryant is a stay-at-home mom of three, identical twin girls and a son. She is a proud Kansas native (insert favorite Toto quote here) and currently resides in the Kansas City metro area. Besides being constantly surprised by the wonders of raising twins and caring for her family, Leah’s hobbies include cooking/baking, gardening, reading actual grown-up books along with Dr. Suess, and cheering on her favorite home-grown sports teams. Leah also meets the challenge of keeping up with Sonny, the newest member of the family. He is an American Eskimo dog the family adopted after he was rescued from a puppy mill.